On Dining With Bourbon’s First Family, the Van Winkles

Pappy Van Winkle whiskeys are virtual unicorns in the American spirits world. They’re fought over, coveted, stood in line for and secreted if found. Those limited brown liquors can be a bit hard to find even in Kentucky.

Unless you know where to look, which isn’t always a bar or liquor store. Sometimes a restaurant is your source.

For eight years, Proof On Main, a restaurant in Louisville, Ky., has hosted a multi-course feast dubbed The Hog & the Barrel Dinner. The coursed meal, prepared by Proof’s executive chef and guest culinary luminaries like Sean Brock, Mike Lata, and Linton Hopkins, features pig parts fabricated into delicious bites. Better yet, all are paired with Glencarin glasses of Pappy Van Winkle whiskey. In that light, the otherwise pricey $150 meal morphs into a bargain. 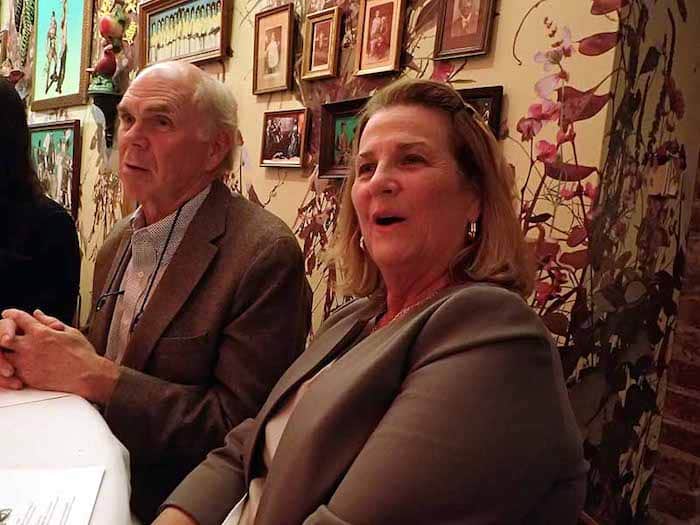 Yes, the full line of PVW bourbons were poured a second time, an unexpected lavishing to be sure. The meal, prepared by Proof chef Mike Wajda and James Beard Award-winning chef Ashley Christenson, was served over a three-hour span, and I was lucky enough to cover it.

Most whiskey fans will never get a sip of Pappy, much less a taste of two or three expressions in a single sitting. And yet, there we were, some 80 guests in all, sipping rounds of every Van Winkle bourbon expression made.

Were my luck already not good enough, I shared the same dinner table with the brand’s owners: Julian Van Winkle and his wife, Sissy, and their son, Preston. The press hack taking his repast with bourbon royalty.

The Van Winkle family would likely cringe at that descriptor, but it’s hard not to bestow it given their product’s high mantle. Yet the Van Winkles are about as down to earth as they come, and the clan has never taken its whiskey’s success or the status it’s afforded them too seriously.

More than once the press has quoted Julian saying he’d not pay the crazy prices some do for his whiskey.

“But I can’t say it makes me sorry, either,” he told me a few years ago at this same meal. “We’re just really glad people like it.”

At the cocktail hour, where guests sipped Pappy 10-year-old neat or in a cocktail (or, ahem, both), Sissy Van Winkle discreetly poured her neat whiskey into Julian’s glass.

“I like our bourbon just fine, but you can imagine we get enough of it,” she whispered. Then, adding through a tight grin, she said, “I really like champagne. I’m fond of bubbles. Is that so wrong?”

Mr. and Mrs. Van Winkle are entertaining, but opposites. He’s dry witted and she’s bubbly. At the risk of being treacly, they’re a sweet match. She loves traveling with him, though he’s working to reduce his road time.

“Though the more I can push off onto to him, I do,” Julian said, gesturing toward Preston. “I still like getting out, but getting onto planes gets old.”

Later, dovetailing into her husband’s travel remark, Sissy said, “If you ever tell anyone this, I’ll kill you. But I have to admit I’ve had enough of (redacted name of lovely resort). I really do appreciate those places, but sometimes you just want to be home in your pajamas with no one waiting on you. Know what I mean?”

I do, of course … the pajamas and no one waiting on me parts. 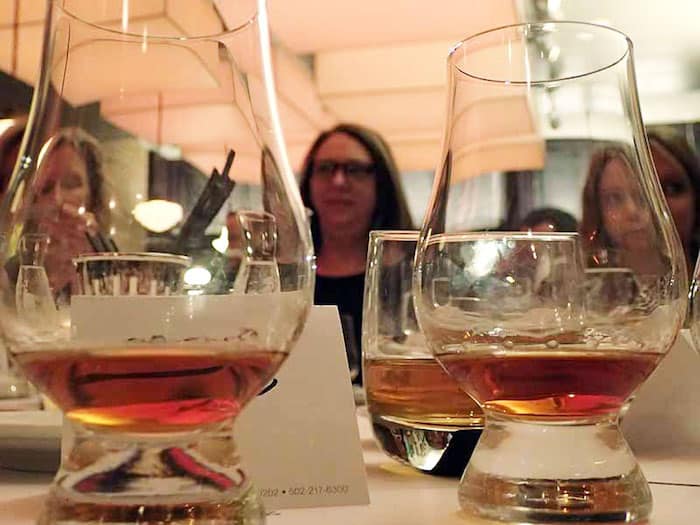 As Preston led the group in the opening tasting, he announced we’d sip all three expressions poured before us (the 15, 20, and 23) rather than interrupting the meal to announce a new whiskey with each course. When I and some others swirled our glasses to open up the 15-year-old spirit, he cautioned us to stop, “because it kicks off too much alcohol at 107 proof.” Indeed, it was a lively sip, fiery, fruity and edgy, a bit like its cousin, Old Weller Antique 107. It remains my favorite of the family’s bourbon line.

When we arrived at the 23, Preston advised drinking it as is. “No water, so you can taste and smell the full effect of what 23 years does to the bourbon.”

And who disobeyed him? His father, who added a small splash from his water glass. “It stretches it out some,” he said, implying that bourbon icons consume responsibly.

As courses arrived, I thought to myself, “Pork and Pappy. How could a meal be better?”

Sissy had her own ideas. After asking a server for a glass of champagne, she leaned to me and joked, “I think sometimes I should feel ashamed that I’m not drinking our bourbon, but I don’t. It’s just what I prefer with dinner.” Overhearing her, Julian nodded his approval.

Midway into dinner, father and son get peppered with questions:

Chef-owner of famed Southern restaurants Husk and McCrady’s, Brock is not only a serious collector of Van Winkle whiskeys, he collects anything made at the Stitzel-Weller distillery in Shively, Ky., before it closed in 1992. On a 2015 episode of, “Anthony Bourdain: Parts Unknown,” Brock declared, “No good American whiskey was made after 1992.”

“His collection is crazy,” he said. “It’s something he’s really passionate about.”

With Preston’s final address to the crowd, Julian acknowledged, “I’m glad to be an observer now more than a participant.”

“The baton is passed,” Sissy added.

Their son is different from both his parents: measured in conversation and manner; friendly and easy-going; more listener than talker.

“He’s good in the role,” Julian told me in an interview some time ago. “It’s a good job, but it’s not as easy or fun as some people might think.”

By the time dessert arrived, the group was on its tenth petit pour of Pappy—a ration compared to a common bar pour, but a generous extra splash nonetheless. As our group stood to leave, others from across the room moved in to greet the Van Winkles. Spoiled to have them as dinner mates for the evening, I backed off to clear the way and stood next to Patrick Hallahan, drummer for the band, My Morning Jacket. Assuming the Louisville-based rock star might be too jaded to savor the Pappy pairing as much as I, I asked, “So, did you enjoy it?” The question seemed to surprise him.

“Of course! How do you not?” said Hallahan, beaming. “It’s not every day this happens to just anybody.”