Created from four different Michigan grains with a mash bill of 57 percent corn, 19 percent rye, 12 percent red winter wheat, and 12 percent malted barley, the bottling is aged for a minimum of two years in new white American oak barrels and offers a sweet autumn nose of green apple, caramel, and wheat, followed by a silky body with notes of browned butter, walnuts and fig, according to official tasting notes. It finishes with the distillery’s signature rye spice with notes of pistachio, burnt orange peel, and cinnamon.

“It’s a special moment when you bring a new bourbon into the family,” distillery officials noted in a prepared statement. “When you make whiskey from scratch, you’re working on it for years before you get to share it with the world. The addition of Four Grain Straight Bourbon represents everything we love about making whiskey — sourcing the finest Michigan grain, making whiskey inside a historic building that was once home to Goebel’s and Stroh’s, and creating a label that screams this is Detroit whiskey, and we’re damn proud of it. Our Four Grain Straight Bourbon represents the best of the farm and the city, and that’s really what we’re all about.” 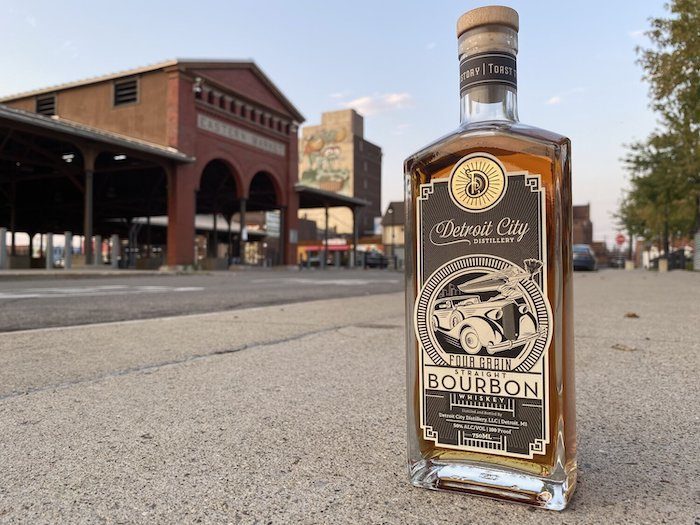 Four Grain Bourbon highlights what’s described as Michigan wheat and the distillery’s creative use of barley malts, which produces a sweeter, silky smooth body that is loaded with fall flavor. In celebration of the new release, Detroit City has also double barrel-aged Four Grain Bourbon in maple, wine and cognac barrels and will release a new single barrel bourbon on the first Friday of each month in the following order with approximately 250 bottlings available for each release for a retail price of $70:

Detroit City Distillery Four Grain Bourbon has a retail price of $55 and will be available at liquor stores starting in October. Official tasting notes for each double barrel-aged bottling can be found here.