Old Forge Distillery is a Tennessee spirits operation set in the foothills of the Smoky Mountains that’s said to be known for its award-winning moonshines, cream liqueurs, gin, bourbon and vodka. It is adding to these now a new, older single barrel Tennessee bourbon named in honor of a historic resident the distillery’s hometown.

The new Cyclone Jim Tennessee Bourbon, according to those behind it, is a 12 year old single barrel offering that was aged for the whole time in your typical new charred oak barrels. It is highly likely a sourced expression (Dickel?) given that Old Forge opened back in 2014. 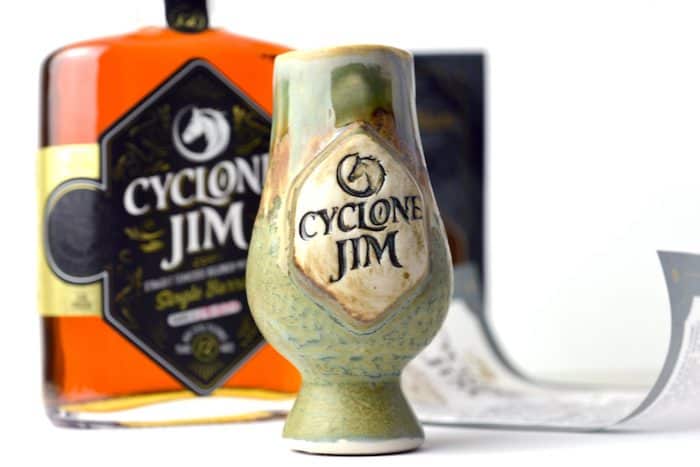 “Describing Cyclone Jim as a limited edition isn’t marketing hype,” said Old Forge Head Distiller Keener Shanton in a prepared statement. “You simply can’t age a whiskey that long without nature shrinking the supply. But the taste makes it all worthwhile!”

Plans call for this bourbon, bottled at 110 proof and non-chill filtered, to be available exclusively through the distillery. No price was mentioned. Each bottle is specially packaged with a stoneware snifter handmade from Pigeon River Pottery, a local pottery outfit. Each snifter has a specific glaze that corresponds to the specific barrel the amber liquid came from.

Limited official tasting notes suggest “a rich, deeply amber whiskey with a delightfully complex combination of highly desirable flavors, including toffee, caramel, vanilla, and oak.” As a side note, the name Cyclone Jim is not in reference to a human, but rather a horse. As the distillery team describes it the equine “powered the clay grinding mill for Pigeon Forge’s original pottery enterprise, now known as Pigeon River Pottery. The beloved Cyclone Jim was in charge of cleaning the freshly harvested clay taken from the Pigeon River.

“As Cyclone Jim’s popularity spread, he and the pottery store became the first tourist attraction in Pigeon Forge. After Cyclone Jim retired, every horse that took on the job took his name.”