In the early 2000s, when bourbon was more about sharing than comparing, Justin Sloan and Justin Thompson were buying bottles, opening and pouring them for friends who reciprocated. But what began as a fascination eventually became a borderline affliction as their swelling personal collections strained their bank balances. Strategies that made whiskey collecting profitable were needed.

Both made a side hustle of curating others’ personal collections, while Thompson helped found the Bourbon Review magazine and Belle’s Cocktail House in Lexington. After Sloan became a partner in both businesses, they envisioned another venture that literally would have no legal competition.

By 2017, Kentucky legislators were discussing House Bill 100, which, when passed, would allow the sale of vintage spirits from consumers to licensed retailers. When it became law in January of the following year, Sloan and Thompson were putting the finishing touches on Justins’ House of Bourbon (JHOB) in Lexington, readying it for its February debut. In 2019, No. 2 followed in Louisville. 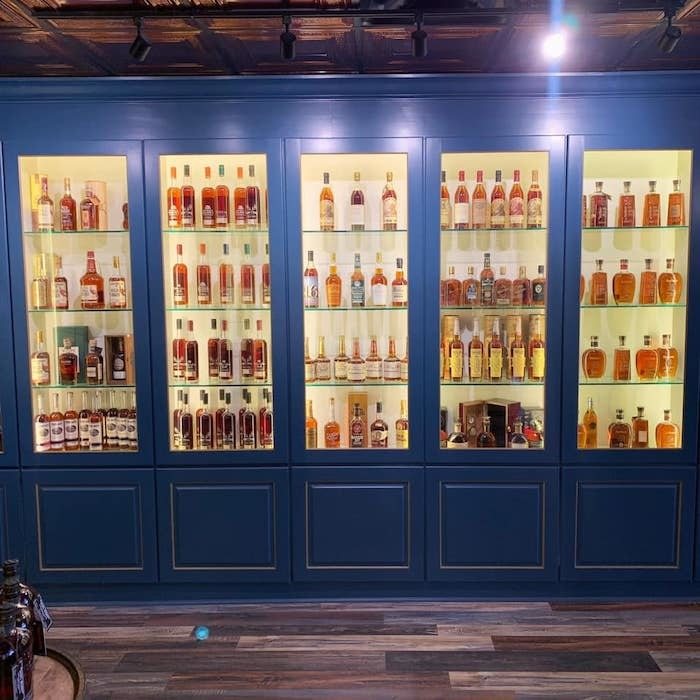 If you’re a fan of American whiskey with plans to visit Bluegrass, make stopping at either a must-do

Each JHOB is a combination tasting bar, package shop, whiskey museum and speakeasy (both JHOBs have a hidden private space for intimate high-end tastings). The bottles displayed in secured glass cabinets range in price from, “I probably shouldn’t spend that, but you only live once,” to “Will you be mortgaging your home for this?” The collection includes iconic brands and bottles rarely seen in the wild by most bourbon enthusiasts, so take your time eyeballing the collection with a cocktail in hand.

Sloan and Thompson said telling stories about those finds never gets old.

“We got into collecting at the right time—about 10 or 12 years ago—and we were fortunate to have been around some of the O.G. collectors,” said Justin Thompson. Kentucky’s “government finally stepped in and did the right thing for a change with alcohol regulations. This was the last missing piece to make Kentucky the ultimate bourbon destination.”

Located in tourist areas of each city, 90 percent of JHOBs’ core customers are travelers. Some are hunting specifically for unicorns in Bourbon Country while others see a package shop where they can nab a modern bottle or private barrel pick at a good price. Many stay to sip pours of vintage whiskeys while others linger and ask questions about the rare bottles lining the shelves. Sloan said part of JHOB’s mission is to create a whiskey experience in which shoppers aren’t intimidated by prices or a lack of knowledge.

“Somebody’s going to greet you when you walk in the door and ask if you’re looking for anything in particular,” said Sloan. “We ask where you’re from and how we can help you find something.”

Thompson said he wants every guest to become a bit more bourbon savvy because by visiting.

“We always want to leave folks with some more knowledge,” he said. “We want them to be able to tell a story to their friends about what they bought. … I think that’s why people come to us, for that service.”

That attention to visitors is a hallmark, for sure, as is the vibe around the tasting bar. Total strangers discuss their drams of the moment, point to their aspirations on the wall and share insights about their collections at home. The discussion is collegial and about whiskey. No fear of the angst and lamentations common to some corner bars.

Some whiskey buyers are a little more confident than others, not to mention better heeled. Minutes after buying a full case of 15-year Very Very Old Fitzgerald bourbon, Sloan and Thompson returned to the store one morning to find actress Kaley Cuoco (The Big Bang Theory) and her then-fiancée, Karl Cook, shopping for bottles. In town for a horse show (Cook is a professional equestrian), the couple took a break to hunt for whiskeys to pour at their upcoming wedding.

Though whiskey fans come from all over for estimates of their bottles’ worth, JHOB staffers never assign such values. If JHOB wants it, a staffer will offer a price and let the seller decide whether to take it or seek a better return elsewhere.

“We’re not hiding in the shadows or asking you to meet us in the parking lot of a Walmart,” said Thompson, who, along with Sloan, launched Bourbon Outfitter, a whiskey and liquor accessories online company, in 2019. “We have our brick-and-mortar buildings. We’re legal.”

If you’re considering such a sale to JHOB, know that all deals are made in person. To save travel time and trouble, the men say photos sent via email or private messaging helps them decide whether a bottle is legitimate and something in which they’re interested. To keep it legal by Kentucky’s vintage whiskey standards, it also must pass three criteria: the bottle can’t be opened; it cannot have been purchased directly from a distillery; and it can’t be currently available through a distributor.

“When we stress that we specialize in vintage and rare bottles, we really mean rare, something special,” said Thompson. “Sometimes that just means hard to find.”

Such as a bottle of Old Fitzgerald Blackhawk, which they own? Want to guess what that’s worth?

“It would get six-figures in a non-charity auction. It was the cream of the crop of Very Old Fitz, and wasn’t available to the public,” said Sloan. The ultra-rare 1970s bottling was made from barrels personally chosen by the Van Winkle family (who owned Stitzel-Weller) for the owners of the Chicago Blackhawks. “I think in the next couple of years it’ll be the most expensive bourbon at auction in the U.S.”

Not surprisingly, that’s not up for tasting at a JHOB vintage whiskey bar.