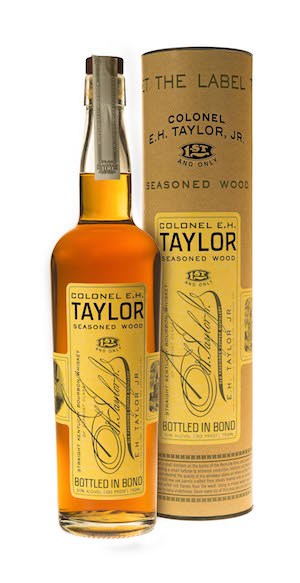 It was about a year ago when Buffalo Trace unveiled the latest limited edition bottling from its coveted E. H. Taylor, Jr. whiskies. The Cured Oak Bourbon, as it was known, quickly became a bottling out of stock at many retailers, resulting in some rather high prices for the few bottles left on the market. Now they are back again with what’s sure to be another quick sell out, the new Colonel E.H. Taylor, Jr. Seasoned Wood Bourbon Whiskey.

This bourbon, according to Buffalo Trace, is a high wheat expression which is 100 proof, Bottled-in-Bond and a one time only release. It has been aged well over a decade, and as for what makes it so special,

the barrels in this release underwent a variety of special seasoning processes, including barrels made from staves that were immersed in an enzyme rich bath with water heated to 100 degrees. After spending time in this proprietary solution, these staves were then placed into kilns and dried until they reached an ideal humidity level for crafting into barrels. Other staves were seasoned outdoors for six months, and still others were left outdoors for a full 12 months before being made into barrels and sent to Buffalo Trace Distillery to be filled and aged. All barrel staves were seasoned, dried, and crafted at Independent Stave Company, who consulted on this project with the premiere expert on oak maturation, Dr. James Swan.

Tasting notes for the American whiskey are below from Buffalo Trace. It is set to price at around $70 when it hits retail shortly, but as with other releases, expect it to realistically cost much more than that depending upon the source.

A delicate aroma of caramel and dried fruit, followed by a bright and pleasant first sip. Oak tannins are balanced by a touch of butterscotch, almond, citrus notes, and hint of spicy clove. The body is soft and balanced with an aftertaste that lingers perfectly.