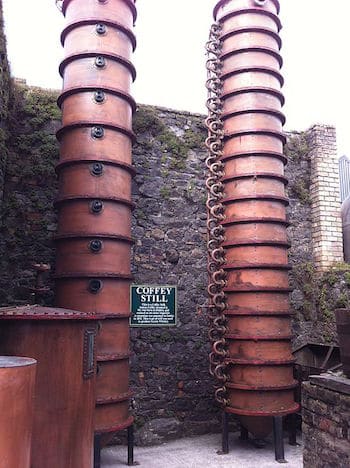 Coffey Still from Kilbeggan Distillery in County Westmeath in Ireland (image by HighKing (Own work) [CC BY-SA 3.0], via Wikimedia Commons)

There are a lot of different kinds of stills in the world. Big stills, “curiously small stills,” tall-necked stills, multi-story stills, tiny stills, direct fire stills, hybrid stills, vacuum stills. But one of the most important distinctions to make in the world of distilling equipment is between batch stills and continuous, column, or “Coffey” stills.

Named after one of its early proponents and patent-holders, Irishman Aeneas Coffey, the Coffey Still was the first commercialized continuous still. Unlike pot stills, Coffey stills can be run continuously, with pre-heated mash introduced while the fractionating column continues to operate. This makes them faster and more efficient in terms of energy and labor than pot stills, which run on a batch system and must be charged between batches.

In general, pot stills produce a lower-proof distillate that retains more of the aromatic oils and large flavor molecules (both good and bad!) produced during fermentation. Coffey stills produce a purer, stronger distillate with a lighter body and more delicate flavor profile. That makes for better blending stock as well as more consistent, predictable quality in the new-make distillate.

So which is better, pot stills or continuous stills? The answer is that uniquely unsatisfying phrase: it depends.

Pot stills hold a lot of cachet, especially in certain parts of the world. Scotch single malt and cognac, for instance, must be made on a pot still by definition. Many craft distillers are also squarely in the pot still camp, although perhaps because they tend to be a good bit cheaper to purchase and operate.

Yet many of the world’s best spirits are made on Coffey stills. Virtually all of the major U.S. bourbon manufacturers use continuous stills, as well as Irish distillers and the major Lowland grain distilleries. Many rum distillers use them, and it’s nearly impossible to produce a true vodka on a pot still.

101
Shares
8.9k
Views
Share on FacebookShare on TwitterGet Our Newsletter
Cheers to the Dads! Personalize a bottle of his favorite whiskey to create a modern gift for the modern man. Use code: FATHERSDAY20 for $20 off your next order of $100 or more at ReserveBar