Chicago Cubs Get Their Own Limited Edition Jim Beam Bourbon

Beam Suntory’s flagship Jim Beam bourbon label is tying up with defending World Series champions the Chicago Cubs for a special commemorative bottling celebrating the team’s championship from last fall. There’s nothing super special about the bourbon itself, being your typical Beam whiskey, but it will nonetheless hold a special place for those who are fans of the Cubs.

The Jim Beam Game 7 Batch, as it is being called, is four-year-old straight Kentucky bourbon which was pulled from barrel on the day the Cubs won the World Series after seven games. It’s got that typical Beam oak vanilla aroma and sweet finish, and is packaged with a commemorative blue cap, batch sticker and specialty label to celebrate Cubs heritage. Its release marks the first time a unique batch of this bourbon has been put to market. 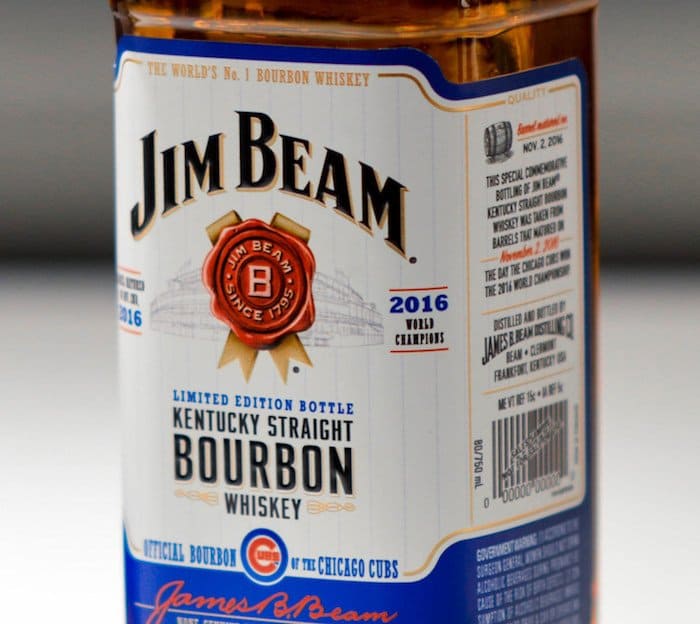 “We’re proud to call the Chicago Cubs part of our growing family, so in celebration of the Cubs’ history-making victory, we wanted to release a history-making bourbon for the occasion,” said Jim Beam’s 7th Generation Master Distiller Fred Noe in a prepared statement. “This exclusive Jim Beam ‘Game 7 Batch’ is our gift to the fans in Chicago from our home in Kentucky.”

“We love to see passion between our team and our Legacy Partners, and Jim Beam’s ‘Game 7 Batch’ is a perfect example of two historic brands coming together in the spirit of celebration,” added Chicago Cubs President of Baseball Operations, Crane Kenney.

Plans call for Jim Beam Game 7 Batch to be released this June in the Chicago area for around $20 a bottle. Fans at three iconic bars near Wrigley Field were treated to a taste of the bourbon earlier this month when Beam celebrity brand ambassador Mila Kunis made an appearance at each of them with the whiskey in tow.