Cedar Ridge Distillery out of Iowa announced recently it had released two new seasonal whiskeys, a Bottled-In-Bond Rye and a Double Barrel Bourbon.

These seasonal releases offer an opportunity for whiskey lovers to try a Cedar Ridge flagship bourbon finished in secondary oak casks and a 100 proof version of its classic straight rye that commemorates the 1897 Bottled-In-Bond act.

The releases are available for a limited time only. 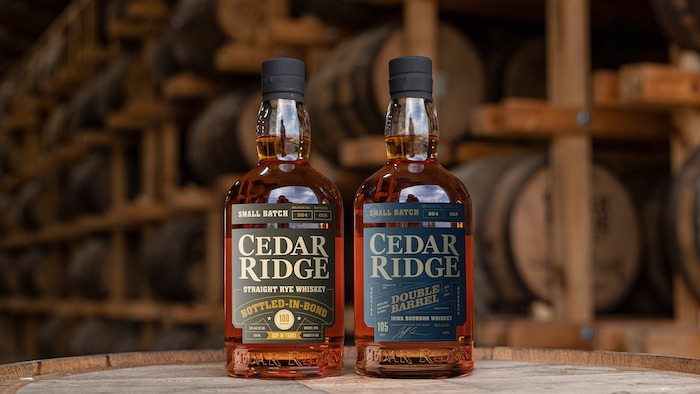 The Double Barrel Bourbon (mashbill 74% corn, 14% rye, 12% malted barley) is aged in a new American Oak barrel to capture the flavors of its freshly charred staves. The secondary finishing cask, it is said, draws out the bold qualities of the brand’s flagship bourbon and the rich flavors of Iowa Corn.

At 105 proof, the first release of Double Barrel Bourbon is available while supplies last at the distillery and select retailers in Iowa, Wisconsin, Illinois, and Minnesota at a suggested retail price of $49.99.

The Bottled-in-Bond Rye commemorates the 1897 Bottled-in-Bond act. It is aged for four years in Cedar Ridge’s federally bonded warehouses, and follows the bottled-in-bond rules. At 85% rye (also 12% rye and 3% malted barley), this whiskey, it was noted by the brand, reflects the hard work of the farm it came from. Its bold spice and hints of toasted biscuit up front are balanced by the measures sweetness of Iowa Corn.