Blue Run Holiday Rye Cask Strength will feature whiskey from the same family of barrels as the recently released Blue Run Straight Golden Rye Whiskey, but at cask strength, coming in at 106 proof.

It will be offered as a standalone bottle with a suggested retail price of $139.99 and is available now. Each bottle is given a “Pollock” treatment on the brand’s signature butterfly, making it an easily identifiable bottle on any back bar. 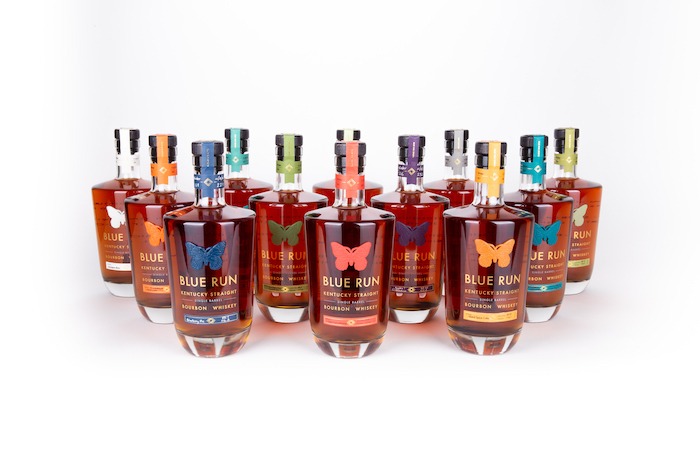 The sourced rye will also come packed with two rocks glasses created through a collaboration with Aged & Ore. The gift sets are $229.99 and will be available online through Blue Run’s fulfillment partner Seelbach’s starting mid-December.

December 1st marks the start of Blue Run’s 12 Days of Single Barrel High Rye Bourbon. Each day until Dec. 12, Blue Run will release bottles from a different single barrel of their High Rye Bourbon, which was contract distilled at Castle & Key Distillery.

Each barrel, which featured a #4 alligator char and was aged in Frankfort and Bardstown, Kentucky, will have its own characteristics based on where it was in the rickhouse and how the whiskey reacted to the wood.

The ryes will range from 115-117 proof and the color of the butterflies will vary based upon the barrel number. These bottles have a suggested retail price of $139.99 and are available through Seelbach’s.

In addition, Blue Run will offer a limited number of complete sets of 12 bottles – one bottle from each barrel.

“We first introduced our Golden Rye Whiskey on Labor Day of this year, followed closely by our High Rye Bourbon … both sold out almost immediately,” said Mike Montgomery, CEO and co-founder of Blue Run Spirits in a prepared statement. “As we bottle our holiday offerings at higher proofs, these releases allow consumers to continue to explore the flavor variations.”

Blue Run’s founders include a Nike designer, the first director-level employee at Facebook, a hospitality executive, a political advisor, and a philanthropist – all whiskey fans. They are backed by a team of advisors including Nike marketing experts; the Campari communications veteran behind Wild Turkey and the Aperol Spritz; a former spirits distributor; and others with deep industry experience. The Blue Run name is a nod to one of the founder’s upbringing in Georgetown, Kentucky.

For more info or to find Blue Run Spirits, check out www.bluerunspirits.com.