There’s long been a move in the Kentucky bourbon world to release whiskeys which play upon nostalgic themes and labels. The most immediately obvious of this theme is the Orphan Barrel bottlings from spirits giant Diageo. Now Campari, owner of Wild Turkey, is getting on the band wagon with its new Whiskey Barons Collection.

As to how Campari is spinning this, they said in press materials the Collection

is an ambitious undertaking to honor and recreate historically significant Bourbons that were lost after Prohibition. Its mission is to resurrect these remarkable spirits so current and future generations of whiskey lovers can taste history while giving back to the Kentucky community that sparked so much Bourbon lore.

Though most of the original recipes and distilling techniques have been lost to the ravages of time, Whiskey Barons is painstakingly piecing together these lost gems with the help of living members of these noble distilling families, historic records, tasting notes, and talented distillers. In doing so, we hope to create a living archive of Kentucky’s great whiskey history, giving these Bourbons and the people who made them a chance to live again. 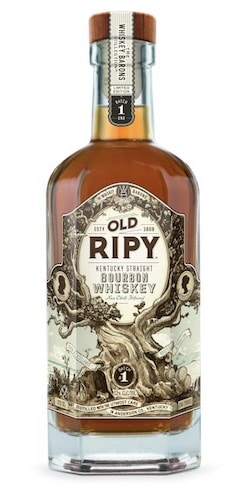 Two initial releases, Bond & Lillard and Old Ripy, are being made available. The first, Old Ripy, comes in a 375 ml bottle and prices around $50. Here’s the nostalgic take on it from Campari:

Born in Bourbon’s heartland in 1868, Old Ripy was created by Irish immigrant James Ripy and continued to be made in Lawrenceburg, KY, on the site of where the current Wild Turkey Distillery stands today, up until 1950. Back then, the Ripy family was ubiquitous in Anderson County’s bustling distilling community. They had opened several distilleries in the area, which remained in the family for generations. T.B. Ripy IV and Tom Ripy, the great grandson and great great grandson of T.B. Ripy, were consulted throughout the project on packaging and liquid development, calling upon original bottlings, brochures, and stories that remain within the family for liquid accuracy.

As the keepers of their family’s whiskey-making legacy, the Ripys advised throughout this project on packaging and liquid development; calling upon original bottlings, brochures, and family stories to help us recreate what we can honestly say is the closest representation of the original Old Ripy brand possible.

Old Ripy is a combination of 8-year-old Kentucky Straight Bourbon with 12-year-old and younger whiskies for added complexity and oak. It is distilled at the Wild Turkey Distillery in Anderson County, aged in timber warehouses and non-chill filtered to retain congeners, fusil oils, lipid fats and proteins we believe you would find in the original.

This results in more natural and complex flavor characteristics, fuller body, and a smooth but “chewier” mouthfeel.

Bond & Lillard was a trusted name in the pre-Prohibition whiskey industry. It was first distilled by John Bond in what was then called, Cedar Run, KY (now known as Anderson County), in 1820. A veteran of the American Revolutionary War, Bond moved his distilling operation closer to Lawrenceburg, KY after the war. In 1842, he left the company to his son and grandson, David and William. William would go on to form a partnership with his brother-in-law, C.C. Lillard in 1869, and they began labelling the product Bond & Lillard.

The business stayed in their families until 1899 and was so revered that it won the Grand Prize at the 1904 World’s Fair in St. Louis. Using the same tasting notes the judges wrote down during the World’s Fair in 1904, we recreated this winning recipe.

Distilled and bottled and at the Wild Turkey distillery in Lawrenceburg, KY, this Kentucky Straight Bourbon Whiskey is aged a minimum of seven years in timber warehouses and is charcoal filtered. This filtration process simulates the aeration process that happens in the barrel, converting more aggressive congeners to esters that end in more elegant top notes.

The result is a lighter colored and flavored bourbon with more floral notes. As the judges at the 1904 World’s Fair declared, this recipe represents “real delicacy of flavor, beauty in the sparkle and superiority in strength – it bears no equal”.

The proof on Bond & Lillard is 100, while for Old Ripy it is a little higher at 104. Both are expected to be available in select markets, including California, Florida, Illinois, Kentucky, Massachusetts, Missouri, New York City, Tennessee, Texas, Virginia, and Wisconsin.