Blinking Owl Distillery is set to release a limited edition bottled-in-bond bourbon, a rare single barrel expression available only to customers in California.

The Batch 1, Barrel 2 Blinking Owl Bourbon derives its name from its origins. The whiskey comes from the first batch that the Santa Ana, California distillers produced when they opened their doors around four years ago. The release is dubbed “Birthday Bourbon” as the first Blinking Owl barrel was filled on September 29, 2016, the birthday of founder Brian Christenson. 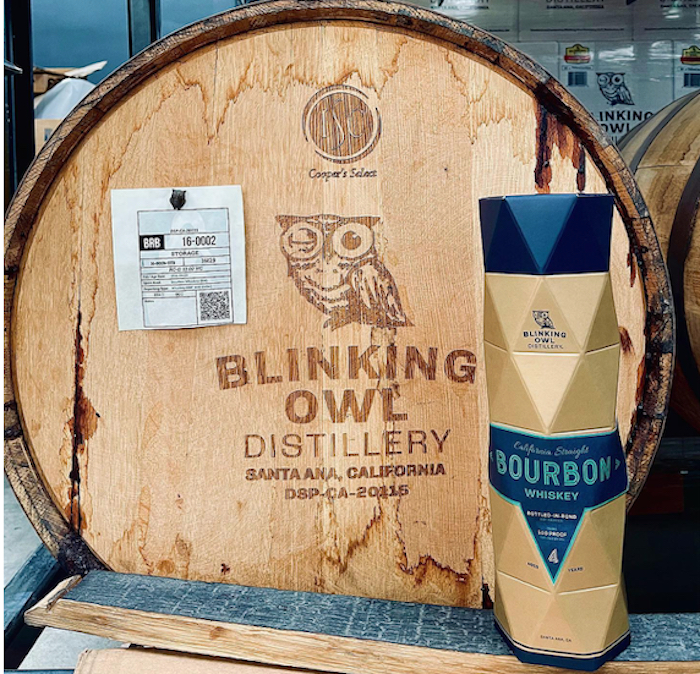 The 100 proof whiskey is made from organic California corn, wheat, rye, and malted barley, and then aged in new American white oak barrels that were toasted and then charred. This release is also Blinking Owl’s first bottled-in-bond expression, and the distiller claims that it is the first “legally distilled, aged, and bottled-in-bond bourbon crafted in Orange County.”

News of this release comes with a bittersweet edge. Blinking Owl Distillery has been hit particularly hard by the pandemic, as they were forced to close their tasting room and outdoor patio area. Though they were able to earn some income making hand sanitizer, otherwise, they’ve had to halt production and furlough their staff. Christenson and his business partners (his wife, Robin, and actor Kirsten Vangsness) are hoping that sales of this limited release will help them cover expenses until they can secure additional PPP funds when they become available.

Only 200 bottles of Batch 1, Barrel 2 Blinking Owl Bourbon will be produced, with an expected release date in February 2021 and a price tag of $250. Unfortunately for the world’s whiskey lovers, the bottle is only available for customers in California. Official tasting notes are below.

Medium golden brown-amber in color, it has aromas of caramel, vanilla, toffee, cinnamon, baked apple and pear. On the palate, its flavor is caramel mixed with sweet baking spices, baked stone fruit and peach cobbler, vanilla, and toffee with spicy notes that linger on the finish.

8
Shares
3.1k
Views
Share on FacebookShare on TwitterGet Our Newsletter
Get The Glenlivet 18 Year Old at ReserveBar. Shop now!