Buffalo Trace is known by bourbon lovers for the many experimental whiskies it releases that are typically small batch in scope. It has been conducting its “experiments” for more than three decades, with one of its first releases in this category being a 10 year old bourbon aged in French oak barrels. It now has returned to its roots in a way, announcing today new bottlings from its Experimental Collection that herald from another French oak undertaking. 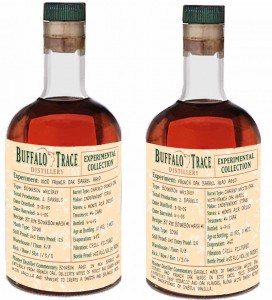 These new 10 year old bourbons, according to the distillery, take the French oak experiment one step further by “creating two different barrel types, one made entirely of French oak, and another using French oak heads, but American white oak staves.

The barrels were both constructed with Buffalo Trace’s exact specifications as far as size, stave drying, and charring.  The barrel staves were air-dried for six months and the barrels were charred for 55 seconds. Both of these experimental barrels were filled with the same bourbon recipe, known as Buffalo Trace Rye Bourbon Mash #1.”

“These bourbons, when tasted side by side, are complementary but yet have subtle differences,” said BuffalMaster Distiller Harlen Wheatley in a statement.  “Both are nice, well-rounded bourbons, but the 100% French oak bourbon has more soft, fruity notes to it, while the bourbon made with the French oak heads and American oak staves offers more of a smoky oak and tannin flavor profile.