Buffalo Trace Fires Up A Fermenter Not Used In A Century

The early part of 2019 finds those at Kentucky’s Buffalo Trace distillery busy with new releases and projects. To date we’ve seen a 20 year old Eagle Rare bourbon and one of their experimental bourbons come to market. On the grounds of the distillery, meanwhile, a once lost to history fermenter used in the whiskey making process has been brought back to life after a century of collecting dust.

Those at Buffalo Trace, back in 2016, uncovered Col. E.H. Taylor, Jr.’s intact fermenting vats dating to 1883, the original foundation wall Taylor built in 1869 and a second foundation built by Taylor in 1873. The distillery remnants and fermenters had been decommissioned, covered with a cement floor and forgotten, until recent work began work on the O.F.C. Building on the grounds there to turn it into more meeting and event space. Once these were found work began instead to excavate and preserve this piece of distilling history with the help of a bourbon archaeologist. The space is now famously referred to by the nickname “Bourbon Pompeii.” 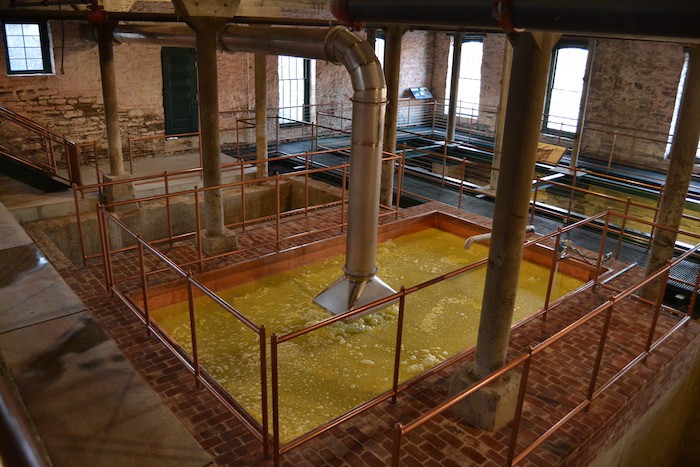 Having since then shored things up, it was decided to bring one of the 100 year old fermenters back online. The top of Fermenter No. 7 has been lined with some of the cleaned-up bricks that were uncovered during the excavation, and was relined with copper like it would have been during Taylor’s tenure. After adding piping to connect the fermenter with the distillery’s microstill, the fermenter was tested last month and then filled with Old Fashioned Sour Mash, similar to how Taylor did nearly 150 years ago. Buffalo Trace had applied for a patent on this sour mash process and received patent pending status in 2017.

It was not immediately clear if the mash being produced in this fermenter would make the eventual journey into becoming some type of whiskey.

The O.F.C. Building, including the recommissioned fermenter and other distillery remnants, can be seen on the complimentary E.H. Taylor Tour, which is offered Monday through Friday by reservation. The tour, which allows visitors to get up close with the now active fermenter, also makes stops at the Old Taylor House and Warehouse C.

In the future, Buffalo Trace also plans to use the upper levels of the O.F.C. Building as event space as originally planned, offering another way to view the sour mash process and experience this interesting discovery.

918
Shares
3.7k
Views
Share on FacebookShare on TwitterGet Our Newsletter
Cheers to the Dads! Personalize a bottle of his favorite whiskey to create a modern gift for the modern man. Use code: FATHERSDAY20 for $20 off your next order of $100 or more at ReserveBar