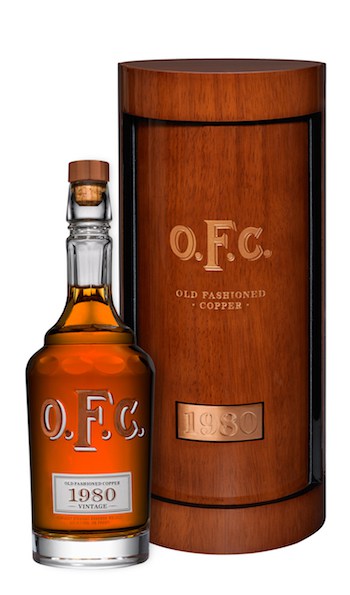 Wow, leave it to the master of American rare whiskies – Buffalo Trace – to drop news pretty much out of the blue about a brand-new collection of older bourbons pulled from its vast warehouses. This new lineup, known as the O.F.C. Collection, will initially be made available only to non-profits for fundraising, but in short order other bottlings from this product line will come to retail as well.

Here’s what Buffalo Trace had to say about these new O.F.C. bourbons. O.F.C., by the way, honors the distillery’s original name – the O.F.C. Distillery:

All of the O.F.C. collection releases will be vintage dated according to the specific year in which the bourbon was distilled at Buffalo Trace Distillery. Each hand-cut crystal bottle will feature the vintage year on the label.

Straight Bourbon whiskey must be aged in oak for at least two years, but these O.F.C. releases matured much longer. Recipe and age will vary by vintage, but many are expected to mature for twenty years or more. Barrels are evaluated regularly and some whiskey will be removed from the barrels as taste reaches the peak of flavor.

The packaging for O.F.C. matches the splendor of the whiskey itself, in lead free crystal bottles with detailed fluting engraved into the mold. Glass artisans cut the shoulder facets using equipment created exclusively for Buffalo Trace Distillery.  Each bottle then is manually polished to achieve maximum glass brilliance before in-laying cut copper lettering to spell out “O.F.C.” on the front.  A paper label is then hand applied below with the vintage prominently noted, along with a label on the back of the bottle noting the milestones for the vintage year of the bottle.  For example, the 1980 label memorializes the U.S. Ice Hockey team’s stunning victory over the Soviet Union, along with pop culture happenings and Ronald Reagan’s presidential election.  The bottle is then given one last polish for the ultimate premium presentation, while a cork stopper with a copper top adorns the top of the bottle to finish out this stunning bottle.

This bottle is a replica of an O.F.C. decanter dating back to the early 1900s found in the Buffalo Trace Distillery archives.  Equally as impressive as the bottle is the display box in which the bourbon is presented. The dark wooden box prominently bears the O.F.C. name in copper, along with a copper plaque depicting the year the bourbon was distilled. Upon opening the revolving door on the wooden case, the bottle is proudly displayed on a small riser, commanding attention as its prized possession is revealed. A provenance card is inside each display box, containing the same information found on the back label. Finally, each box is then packaged in a tasteful cream colored bag to protect it from any damage before placing it into the shipping boxes.

WOW! While no specifics on price per bottle have been announced yet, one can only imagine these will be on the super high side as far as collectible bourbon goes. Perhaps it will even quickly jump into our list of most expensive bourbons. In the meanwhile, Buffalo Trace is, as mentioned above, giving first dibs on these to non-profits. Here’s what to know on that:

Non-profit organizations located in the United States who are interested in obtaining a bottle to use as a fundraiser for their charity should visit https://ofcvintages.com/ to fill out an application.  To be considered, organizations must submit an official U.S. non-profit tax ID number and use the bottle forfundraising purposes only. Applications will be taken online only and recipients of the bottles shall be notified by email by November 1st, 2016, at which time bottles will be shipped free of charge. Charities will have until March 1st, 2017 to auction their bottle and report back to Buffalo Trace Distillery how much money was raised.

Expect the first general retail release of these expressions to hit the market in the spring of 2017.

“These vintages are certainly unique and special whiskeys,” said Buffalo Trace’s Kris Comstock in a prepared statement. “We hope this O.F.C. collection can pay tribute to the many years gone by here at the Distillery. Each vintage has a story to tell indeed,” stated Kris Comstock from Buffalo Trace Distillery.  “To offer this first release to charitable organizations for their fundraising efforts makes this even more rewarding. We expect bottles to raise upwards of $10,000 each for worthy causes.”