“I want to congratulate the leaders of Brough Brothers Distillery as they open their facility to the public,” Kentucky Gov. Andy Beshear said in a prepared statement. “This is a tremendous project for our state’s bourbon industry for a number of reasons, particularly as this is the first African American-owned distillery to be recognized as a member of the Kentucky Distillers’ Association. I look forward to seeing Brough Brothers grow in Louisville’s Park Hill neighborhood.” 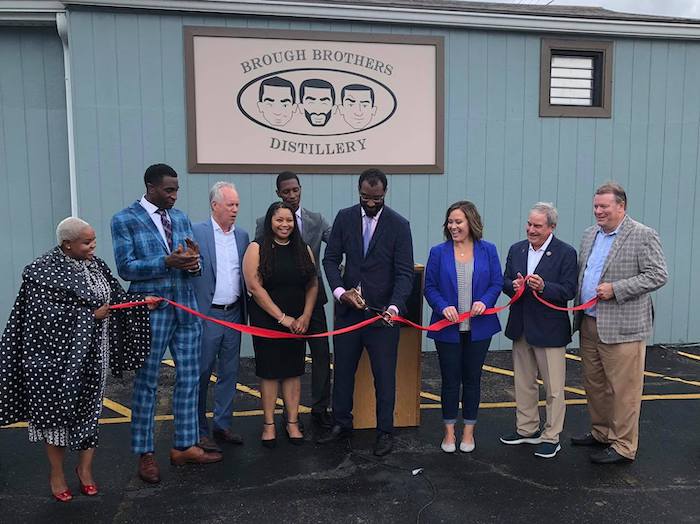 Brough Brothers unveiled its 2,200-square-foot facility, which began production in 2020, with its first barrel of Brough Brothers bourbon filled in December. On the market now is the company’s 82-proof bourbon, currently available in 25 states, with that number expected to grow before the end of the year.

The bottle’s design features images highlighting Kentucky’s culture, including bourbon, basketball, boxing, horse racing and the skyline of Louisville. The craft distillery includes copper and steel stills, and produces one barrel per week, with production expected to ramp up to five to 10 barrels per week by the end of 2021. The operation is now open to the public, with tours available by appointment.

Company leaders also anticipate future expansion – either on-site or at a new location – to include a line of premium bourbon, as well as a bourbon to honor veterans.

In April, Brough Brothers Distillery became the 42nd member – and 24th craft-level member – of the Kentucky Distillers’ Association. It is the first African American-owned and -operated facility to join KDA since the organization’s founding in 1880.

Founded by brothers Victor, Bryson and Chris Yarbrough, Brough Brothers began in the United Kingdom in 2012 as a bourbon and spirits import/export business. The company established a presence in the U.S. in 2013, with plans for its distilling business dating back to 2017.

Louisville Mayor Greg Fischer cheered on the company’s leaders for this milestone within the bourbon industry.

“I want to congratulate Victor, Christian and Bryson Yarbrough for pouring their hearts and spirits into their vision for creating the first black-owned distillery on Kentucky’s Bourbon Trail,” Fischer said. “Bourbon is a critical part of our growing economy, and with the addition of this new distillery in the historic Park Hill neighborhood, the industry will grow stronger and investments will continue to flow into the area.”

For more information on Brough Brothers, you can check out BroughBrothers.com.