There are a lot of different ways to experience bourbon tourism in Kentucky.  I recently organized a group of families who toured Buffalo Trace with their kids.  Instead of experiencing the traditional tour with kids in tow, the kids were the focus.  A few weeks ago, a friend on Twitter began planning a tour of bourbon country with his friends and asked for my recommendations.  The caveat- they would be riding bicycles.

“When you’re on a bike there’s a lot less room for error. If something goes wrong, it’s on you to fix it,” says Chris Mayhew, a Cyclocross rider and bike racing coach at JVB Coaching in Pittsburgh.  He grew up in Kentucky riding bikes, so he had an idea of what to expect.  He got the idea when he saw a video on the KDA website of a professional bicycle racer touring The Kentucky Bourbon Trail. 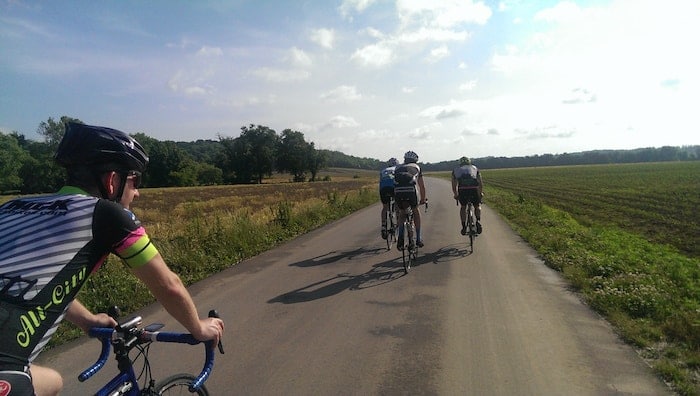 He got a group of amateur bicycle racers together and headed to Kentucky.  Mayhew himself grew up in a Southern Baptist family that did not imbibe, and only really began to drink bourbon within the last few years after some was given to him after a bicycle race.  He recalls ordering Maker’s Mark at a restaurant once on his wedding anniversary and his wife had to explain to him the difference between “neat” and “on the rocks,” but he recalls that as the moment he really began to like bourbon.

He and his friends, all fitness enthusiasts, tailored their trip to the fact that their shared interest was bicycle riding and not bourbon.  Some in the group like beer better, and at least one person had never been to Kentucky before.  “You can’t go visit the Apple or the Facebook factory,” says Mayhew, adding it’s one of the few products where you can actually go see where it’s made.

Everyone in the group says they really enjoyed the experience.  “When you’re on a bike you’re kind of more in touch with everything,” Mayhew told me, recounting a story of stopping to enjoy the natural beauty of a Kentucky flood plain.

The group hit portions of the Bourbon Trail biking from Louisville to The Heaven Hill Bourbon Heritage Center and Willett on a recent Saturday after spending Friday afternoon checking out the Urban Bourbon Trail.  The next day they stopped by The Evan Williams Bourbon Experience on their way out of town.  “We had three super different experiences [at the various distilleries], and I would encourage [others to do] it.”

There are many different ways to experience bourbon tourism in Kentucky.  Even if you don’t like bourbon, you can learn a lot about the culture and heritage innate in the Kentucky bourbon industry.  If you need help tailoring your trip, feel free to tweet me @LouGirl502.  I’d love to help!