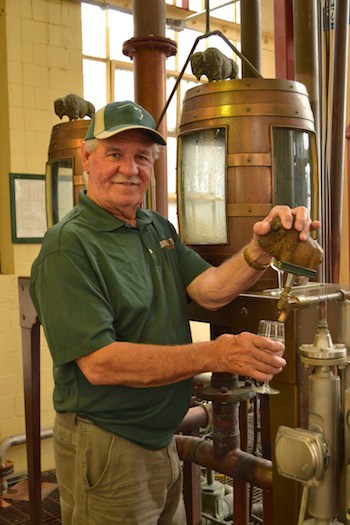 The Whiskey Wash has been tracking down “Old Timers” in the whiskey industry to let them tell their stories. Jim Hall is one such example, having been at Buffalo Trace more than five decades. We recently caught up with Hall to gather his thoughts about what he has seen since he started in 1963.

Year You Started At Buffalo Trace: 1963, when the distillery was owned by Schenley

1. Tell us about your first position at Buffalo Trace and what you’re doing today.

I started in pre-wrap where I wrapped finished bottles and packaged them into boxes. There is no longer a pre-wrap job at Buffalo Trace as we switched to carton packaging. Today I run a state-of-the-art control system running the stills at Buffalo Trace.

2. What has been the biggest change in the bourbon industry since you started?

3. What was it like working with Elmer T. Lee, and do you have a favorite story to share about him?

Elmer was the engineer at Buffalo Trace and was a big part of the plant operation. My girlfriend once bought a car from Elmer T. Lee.

4. You’ve worked through the dark days of bourbon when no one was buying it and through its renaissance. What has been the most surprising part of the bourbon boom?

There has never been this much demand for bourbon in my 54 years. It’s amazing how Sazerac took a distillery that didn’t have much production and made it one of the top distilling companies in the world.

5. How has bourbon tourism changed since you first started at Buffalo Trace?

We went from no tourism to over 150,000 visitors a year. It’s a joy to see all the visitors come in and appreciate the job I do. It was a joy to meet a celebrity like Kirk Herbstreit from ESPN. When I first started I never thought I would meet a celebrity at the distillery.