Ready to drink cocktails, or RTDs as some know them by, have become an increasingly hot trend, particularly during this ongoing era of COVID. Usually consisting of select ingredients, including a base liquor such as some type of whiskey, RTDs make it quite convenient to enjoy your favorite mixed drink without being at a bar or having to make your own.

Now, in an interesting side step to this, one cocktail company has become seemingly one of the first in the United States to use resealable cans for canned spirits such as bourbon (Irish whiskey in a can is already out in the market, and there are some other things of note in this niche space that have come out over time as well).

Simplicity Cocktails, based in Salt Lake City, Utah, announced it is releasing locally a “new premium canned vodka and bourbon line-up featuring innovative resealable cans.” These 355 ml, 12-ounce cans sport what’s described as “an easy lift and slide back lid that allows for a smooth pour, to then reseal, making it the perfect addition for any active lifestyle. Two 12-ounce cans are equivalent to just over a standard fifth of spirits and eliminate the burdensome glass packaging and the often-added step of pouring the spirits into a flask for transport.”

The new canned bourbon, more of interest to us here, is said to be made “with authentic American bourbon distilled in North Carolina and packaged in resealable cans at Simplicity’s lab. At 59% ABV, the bourbon is a bold spirit with subtle hints of sweetness that can be sipped or mixed in any setting.” 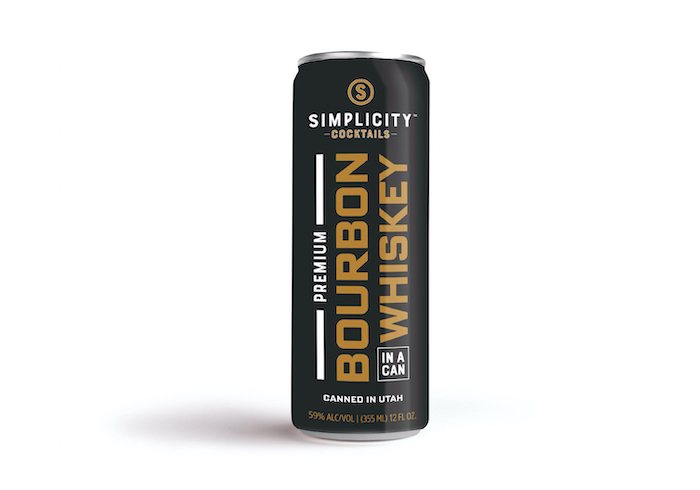 Simplicity Bourbon in a Can (image via Simplicity Cocktails)

The vodka, meanwhile, is made with Idaho potatoes, being distilled in Idaho to 95% ABV. Simplicity then proofs the distillate to 40% ABV at its lab in Salt Lake City.

“The Simplicity Cocktails team is excited to introduce our new first-of-a-kind vodka and bourbon lines to our collection,” said Chris Weed, Co-Founder of Simplicity Cocktails, in a prepared statement.  “As the weather heats up, so will all the outdoor adventures. These elite spirits married with our innovative resealable cans will add a refreshing reward to all the Utah action this summer.”

Plans call for the canned bourbon and vodka to initially be available for purchase directly through Simplicity, and may be available throughout Utah state liquor stores by the end of the year. There was no immediate mention of plans for distribution outside of their state and, as for price, expect to pay around $16 for the bourbon and $13 for the vodka.

Simplicity Cocktails, for those unfamiliar with it, was founded by Weed and Chad Linville in 2018. It is said the two “had a vision of bringing ready-to-drink, premium canned cocktails to Utah’s vibrant and active culture, and launched Utah’s first canned cocktail company. In just over three years, the company has grown to 11 canned cocktails and two canned premium spirits.”

79
Shares
4k
Views
Share on FacebookShare on TwitterGet Our Newsletter
Cheers to the Dads! Personalize a bottle of his favorite whiskey to create a modern gift for the modern man. Use code: FATHERSDAY20 for $20 off your next order of $100 or more at ReserveBar