Stamping Ground is a small town in Kentucky’s Scott County, about 25 miles northwest of Lexington. It was named by its first settlers who saw herds of bison trampling the grass around a fruitful spring. Not long after the buffalo departed, the spring was turned to production of whiskey. There was a distillery on the site for about 100 years.

The last one, known as Buffalo Springs Distillery, was founded early in the 20th century. It produced several bourbon brands including Boots and Saddle. The plant was substantially rebuilt after Prohibition and Otis Beam, one of the seven sons of Joseph L. Beam, was distiller. Eventually purchased by Seagram’s, which owned 14 Kentucky distilleries at one time, Buffalo Springs ceased production for good in the 1960s and stood vacant for many years thereafter.

The buildings, some made of locally quarried limestone, are gone but the spring still flows. The former distillery site is now Buffalo Springs Park. Another remnant of the distillery is a concrete and rock structure with several large, concrete circles. On September 12, 1935, the distillery held a burgoo party for the town and the circles provided a firm base for the large pots of burgoo. (Burgoo is a traditional Kentucky stew. A recipe is here.) 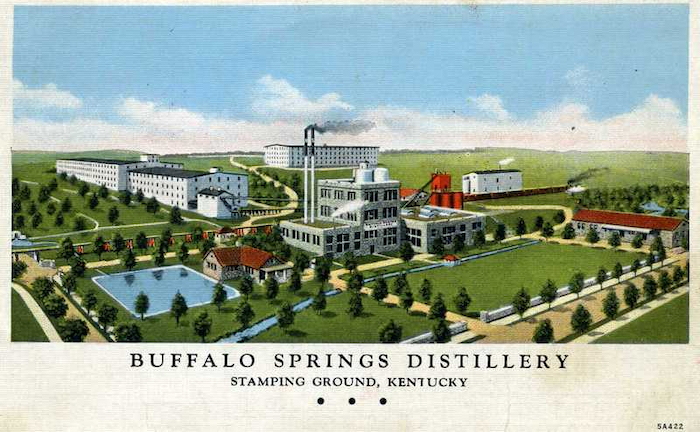 Buffalo Springs was typical of the many small town distilleries that once abounded in the region. It operated seasonally, from late fall until early spring, and employed as hands local farmers who might otherwise be idle for the period between harvest and planting. As one of the few sources of non-farm employment, it dominated the local economy and was a powerful part of the town’s consciousness.

Modern craft distilleries are playing a similar role in many parts of the country today. Not by employing farmers necessarily, but by providing jobs and tax revenue and complementing existing agricultural, tourism, and hospitality businesses.

This article is a repost from my blog.