Carroll Perry mans the guard shack at the entrance of the Stitzel-Weller Distillery in Shively, Ky. He’s worked there in some capacity or another for decades, and since the revitalization of the grounds and addition of the Bulleit Experience at Stitzel-Weller has become somewhat of a celebrity among whiskey geeks.

“Right over here in the fields behind the warehouse they had what was called ‘the family garden.’ Everyone had a spot they’d stake off. They had a farm tractor and everything,” says Perry, a 46-year employee of the distillery. Perry would grow tomatoes, peppers, onions, and cabbage on the distillery grounds, adding that everyone would try to grow different things so they could trade. He points to the fence along Fitzgerald Road, recalling the seven apricot trees that used to line it. “We also had fruit trees. You’d just go out there with a paper sack and pick what you wanted of it.”

In those days, the distillery was named after its top product, Old Fitzgerald, though Perry’s bourbon of choice was W.L. Weller seven-year-old 90 proof. Perry had a friend there who worked in advertising and helped him get on as a temporary replacement for an employee injured in a car accident. After that employee returned, he moved to working in the warehouse–in a job no one wanted. But in order to become a permanent employee at the distillery, he needed to work 60 days straight, no absences accepted. 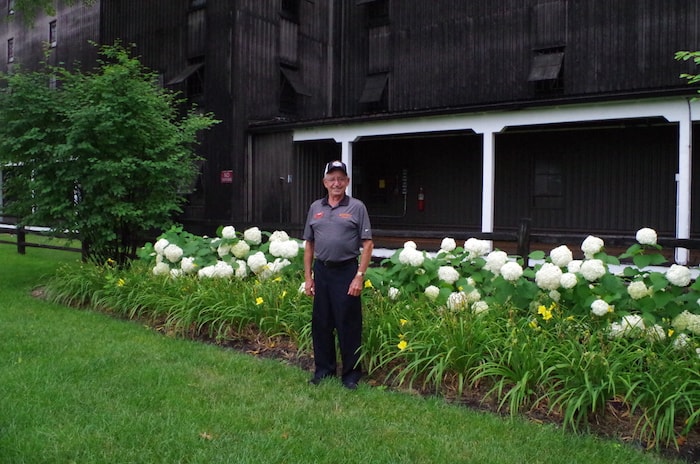 Perry not only made it, he became a union employee qualified in 14 different warehouse positions including shipping, receiving, forklift operator, truck driver, and glass dumper. He worked in the cistern room and the filler room, dumping, filling, re-gauging, setting bungs, and rolling barrels. When asked why he never worked in distilling operations, Perry says, “Back then in that era, all the old timers who worked in the distillery, they never quit. They [worked until they] died.”

When Perry started working at Stitzel-Weller in 1970, Julian P. Van Winkle II was still at the helm.

“Julian knew everybody by their first name,” Perry says. “He’d come through and speak to you and ask how you were doing.”

He also helped train Van Winkle’s teenage son, Julian P. Van Winkle III, on warehouse duties like rolling and bunging barrels. He taught him how to fix leaky barrels and how to kick them so they would roll to the far end of each rick.

“After that we started calling him ‘Ripper’ Van Winkle,” laughs Perry.

Perry recalls visitors who would frequent the distillery back then: politicians and VIP friends of Julian II.

“I remember the parties he gave here were super,” he laughs. Derby parties were always held out in the field where they’re still held today. Van Winkle II would even designate one of the guards as a designated driver to take party guests home who had been over-served.

“We had tours here when I started, but they were nothing like this,” he says, referring to the hoards of bourbon enthusiasts who visit the distillery now. His recalls his most memorable tour guest as, “Lorne Green and the boys from Bonanza … . I took ‘em around and showed ‘em the plant.”

Perry was around to dump the 1 millionth barrel, filled in 1966, which is now enshrined on a wall in the visitors center. Van Winkle II was around for that, though the Van Winkles’ involvement in the distillery was drawing to a close.

The Van Winkle family and the distillery’s shareholders sold the operation in 1972, seeing it change hands a number of times before United Distillers of North America took took over. Though the distilling operation closed in 1992 and the bottling line stopped in 1994, Perry continued working as a security guard on the property until retiring Sept. 30, 1999. He returned to work part time on Jan. 1, 2000, and after his wife died, Perry worked more at the site. Now he’s such a fixture in the guard house, regular visitors wonder if something is amiss when he’s not at his post.

During his time with United Distillers he served under Ed Foote, the last master distiller of Stitzel-Weller.

“He was a wonderful person, another good one that was here. He was excellent to work for,” Perry says.

When Perry started at Stitzel-Weller, there were eight small bottling lines. Today, those have been replaced with one enormous one, and the facility is owned by Diageo. But the charm and the roots of this place are still apparent, and massive stores of whiskey still occupy the site’s many rickhouses.

Today it is the home of the Bulleit Experience at Stitzel-Weller, as well as several other bourbon brands such as Blade & Bow, The Orphan Barrel Project, and I.W. Harper.

One evening as Perry patrolled the grounds as a security guard, he met Tom Bulleit, founder of his namesake brand. In reminiscing about their tours in Vietnam, the pair discovered they’d served in the same place at the same time.

Laughing about his newfound celebrity among whiskey fans, Perry says, “It took me 72 years just to get my name recognized.” That modest notoriety surprises him, but not as much as the meteoric rise in bourbon tourism.

“I never dreamed of it,” says. “Absolutely not. I’m amazed.”