Editor’s Note: Our longtime whiskey feature writer Maggie Kimberl branches out in a debut column with us, focusing on pairing cigars and bourbon. 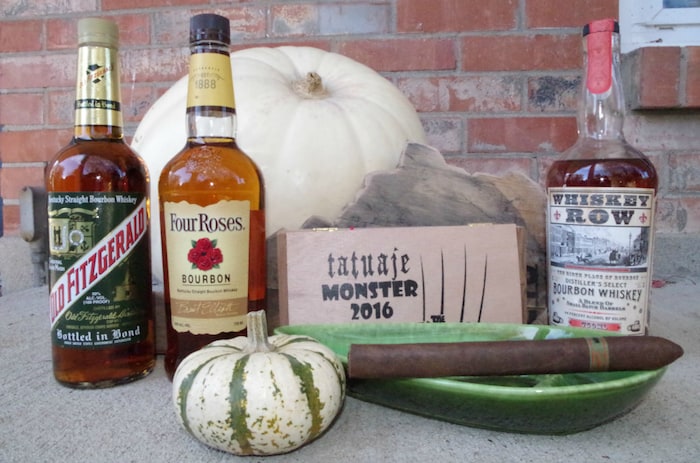 It’s Pappy season here in Kentucky. That means people are camping out at liquor stores, entering in raffles, and calling retailers frantically trying to get a bottle.  Most bourbon geeks don’t realize they are living parallel lives with cigar geeks.

Each October since 2008, Tatuaje Cigars has released a special “Monster Series.” Thirteen retailers, referred to as the “Unlucky Thirteen,” across the United States are chosen to receive a “dressed” box- this year’s looks like a coffin. This year’s release is called the Krueger after infamous horror movie star Freddie Krueger. Only 666 numbered ten-count boxes are made per year.

This cigar is longer than a conventional cigar, presumably to carry thorough the monster theme. The technical specifications are 7 ¼ x 48 box pressed torpedo. Despite its rare and coveted nature, it is only a $13 cigar – quite affordable as far as premium cigars go.

The cigar’s construction is beautiful, sporting a trendy box-pressed look. The maduro Mexican San Andres wrapper is dark and looks like high-end saddle leather, reminiscent of when Coach used to make things out of saddle leather instead of delicate glove leather.

Upon the early draws, this cigar tastes like fall, with notes of bread dough, earth, and mild spice. It is medium to full bodied, so it will pair best with a lower proof chill filtered bourbon. A wheater is likely to pair best, but balance is the key. Four Roses Yellow Label tends to stand up well to cigar pairings because the ten recipes combine to form a very well-balanced flavor profile.

Together– The smoke brings out apple and spice notes in the bourbon. The bourbon brings out the grassiness of the smoke. Together, they are like drinking warm spiced apple cider on a hay ride.

Together– The smoke highlights the light green apple and baking spice notes in the bourbon. The bourbon brings out the flavor of sweet cornbread in the cigar. Together, they suggest cornbread dressing with spiced apples.

Together – The smoke brings out brown sugar, heavy baking spices, and fresh corn in the bourbon. The bourbon brings out wood and nuts in the cigar smoke. Together, they are like deep fried cornbread fritters topped with cinnamon sugar toasted walnuts.

I don’t know whether the falling leaves in my back yard influenced my palate, but everything about this cigar screams fall to me. The bourbons I chose were already within my predetermined spectrum, so none of these was a bad pairing. Any one of these bourbons would yield a positive result, and it’s always fun to put together a flight of bourbons so you can see which ones play up which characteristics.

As with all cigars, the smoke changed from beginning to end. While the Four Roses Yellow Label was a clear forerunner throughout most of the first half, as the cigar warmed up in the second half I found I preferred the Old Fitzgerald.

If you find yourself fortunate enough to find a Tatuaje Krueger in your favorite cigar shop, try it with a flight of bourbons under 100 proof. Higher flavoring grains in the mash bill help lend complexity to the pairing. Take notes and enjoy!