Bourbon and cigar pairings are all about what you enjoy the most. If you like heavily peated Scotch with your cigar, have at it. But if you are looking for a new way to approach your pairings, the best way to enjoy both is to look for balance. Don’t be afraid to try a flight of bourbons to determine which one works the best!

According to Cigar Aficionado and Ashton, La Aroma de Cuba has been on the market almost 15 years. The brand is owned by Ashton, but they are made for Ashton at the My Father Cigar Factory in Estelí, Nicaragua. These are affordable, high quality cigars made to appeal to anyone who likes a Nicaraguan to smoke.

This particular La Aroma de Cuba has received consistently high ratings and reviews. It has been rated 93-95 by Cigar Aficionado and received 13th place in their top 25 of 2016, after placing in the top 10 in previous years, including a year at the #2 spot. Suffice to say this is a REALLY good cigar.

The cigar is made up of a maduro San Andrés wrapper and Nicaraguan fillers, sporting a box-pressed belicoso shape. It is medium bodied, well balanced, and has a fabulous draw. Main flavors include coffee, chocolate, and spice. The MSRP is $8.25, a fantastic price for such a well-made and well-balanced cigar. 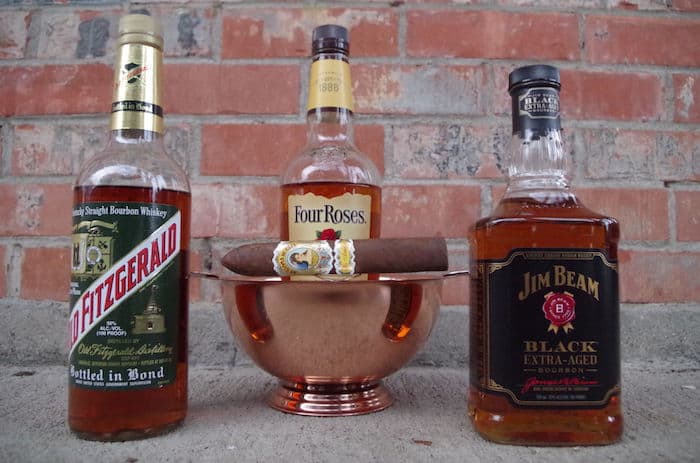 Together: The smoke brings out spiced orange notes in the bourbon, while the bourbon mellows the smoke to reveal a nice milk chocolate latte flavor. This is a very enjoyable pairing.

Together: Not a bad combo, but they aren’t doing anything super special to each other. This would be a great pairing if you wanted both bourbon and cigar to stand on their own merits. Nothing gets drowned out, but nothing is highlighted, either.

Together: The bourbon brings out a dark chocolate mocha in the cigar, while the smoke mellows the spice in the bourbon and brings out more of a ripe apple note. There is complexity in this pairing, but nothing becomes overwhelming. It is a very balanced and enjoyable mix.

There were no bad pairings in this bunch. My favorite overall was the Four Roses Yellow Label. It has continued to amaze me that such an easy-to-find bourbon can pair well with 70% of the cigars I team it with. The balance of the bourbon and of the cigar complement each other nicely, playing up the other’s opposing characteristics. Where there is spice in the bourbon, it is mellowed by the smoke; where there is strong coffee and chocolate in the smoke, the bourbon is rounding it out to a warm mocha latte.

My second favorite pairing with this cigar was the Old Fitzgerald. This bourbon has been bringing me all sorts of surprises lately, today’s biggest one being when I looked down to take notes and noticed how deep the amber color was. The cigar didn’t need any help to be sure, but this bourbon sure made it extra enjoyable.