I recently finished reading Jim Kokoris’ Big Man of Jim Beam, all about Booker Noe. One story I’ve heard repeated over and over again about Booker is that he never told people how to drink their bourbon. “Drink it any damn way you want,” is what he would say, even if you wanted to mix it with Coke.

The same goes for cigars. If you want to drink the same bourbon, or Scotch or Japanese whiskey for that matter, no matter what kind of cigar you are smoking, I say go for it. This article is not for you. If you want to learn what to look for in a good cigar and bourbon pairing, read on. I advocate for the “opposites attract” method, which is more about achieving balance than anything else. 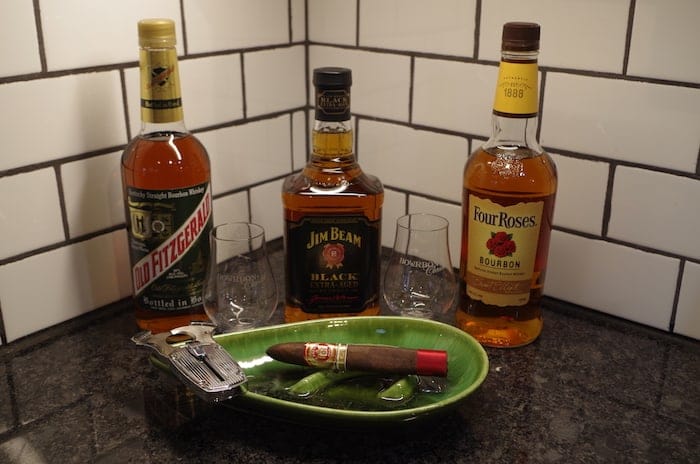 In 1998, Hurricane George wreaked havoc on the cigar industry. Wrapper leaf, which is typically fermented and aged for two years or more, was decimated in the Caribbean region. When it came time for Arturo Fuente to make the coveted Fuente Fuente Opus X cigars two years after the storm, there was no wrapper leaf available. Carlos Fuente, Jr. decided to try a Connecticut wrapper instead, inventing the Añejo in the process.

Today the Arturo Fuente Añejo line comes in eight sizes, and is released at Father’s Day and Christmas. The most coveted and rare of these is the No. 77 Shark, on which there is a limit of two per customer at most shops. Even in my minimum wage days I always bought my two Sharks each year at Christmas. This is the best $15 (at my shop, prices vary) cigar going.

This cigar has a lot of unique characteristics. The head is a torpedo parejo with a slight taper, but the taper becomes exaggerated toward the foot, which is box pressed. It progresses from a 50 to a 64 ring gauge. The filler and binder are Dominican from Chateau de la Fuente, and the wrapper is a five year old maduro Connecticut leaf which has been aged in a cognac barrel. The construction is as close to perfect as it comes- even though I lit it poorly, the cigar recovered and burned evenly after the first third.

Together: This turned into a baking spice bomb. The cigar brought out an enhanced green apple finish on the bourbon. The cigar was pushed to the background with this pairing.

Together: This combination was all sweet brown sugar and baking spice. The smoke brought out more of the apple cider flavor,  and the bourbon brought out milk chocolate in the smoke. This was by far the best combination.

I hadn’t tried the new NAS bottling of Jim Beam Black, and I have to say I was pleasantly surprised by this bottle. Whenever an age statement is removed, you never know what you’re going to get, but this one doesn’t seem to have suffered in any way. The low rye mash bill of this bourbon made for a fabulous pairing for this maduro-wrappered cigar that seemed to enhance the spice notes in whiskey.

Together: This was another spice bomb combination. Typically when I talk about “opposites attract,” it’s all about getting that balance of a low-proof but flavorful bourbon with a medium bodied cigar. Because the maduro wrapper on this cigar tended to enhance the spice notes in all the bourbons, those with more baking spice from rye or yeast tended to become overwhelming. The apple in this combination faded completely into the background, and the bourbon brought out a doughy flavor note in the cigar.

The combination was like overly spiced sweet sticky buns. This is probably the first cigar I’ve tried that didn’t go spectacularly well with Four Roses Yellow Label, which came as a total surprise to me.

I love this cigar and I’ve had a lot of experience with it, but pairing it with bourbon brought me all kinds of surprises. That’s why I love doing this – just when I think I have it all figured, out I’m thrown a curveball. The Jim Beam Black was the clear winner here, not at all what I expected when I threw it into the bourbon lineup at the last minute.

I can’t wait for next year’s  Arturo Fuente Añejo Shark release to try another pairing. If you happen to find this cigar in your shop, buy as many as they will let you and enjoy!