Heaven’s Door Spirits, as we’ve explored since the brand was first announced a few years back, is a passion project for legendary musician Bob Dylan. Of the offerings that come from the team in charge of producing whiskey releases for it, the Bootleg Series is considered the most premium and rarest available. Said series is now on its second offering, taking the form of an older bourbon finished in ex-Jamacian rum casks.

The new Heaven’s Door Bootleg Series Vol II, according to those behind it, is a cask strength, 15 year-old straight bourbon finished in 30 year-old Jamaican pot still rum casks. This expression come in a handmade ceramic bottle featuring Dylan’s painting, Sunset, Monument Valley, and is housed in an ornate leather journal that is individually numbered. 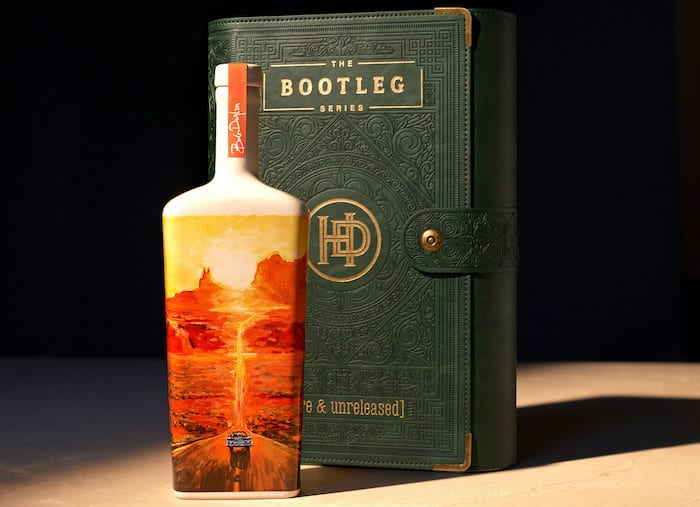 “After nearly two years of experimentation with different blends and barrel finishes,” said Heaven’s Door Master Blender, Ryan Perry, in a prepared statement, “we have created an incredible whiskey for the Bootleg Series Vol II. I was intrigued by the idea of using Jamaican pot still rum casks to imbue the 15 year-old cask strength whiskey with a soft, round and lasting finish that is distinctive and complex.”

The 2020 Bootleg Series follows upon the heels of last year’s 2019 release, aged 26 years and finished in ex-Mizunara oak barrels. This particular offering received The Chairman’s Trophy and was named to the Top 100 Spirits at the Ultimate Spirits Challenge 2020. It also sold out immediately upon release.

Heaven’s Door Bootleg Series Vol II, bottled at a cask strength of 104.6 proof, is spreading out at retail right now. It is a limited edition release, with fewer than 3,000 bottles for sale around $500 each. You’ll find some official tasting notes below for your consideration. As a side note, it is said Dylan is a painter and sculptor on tope of being a musician and the painting that’s on the bottle “was recently featured in Bob Dylan’s Retrospectrum at the Modern Art Museum in Shanghai, China, along with more than 250 of Bob Dylan’s artworks in an array of media.”

97
Shares
9.8k
Views
Share on FacebookShare on TwitterGet Our Newsletter
Read More Whiskey News
Column: Despite The Coronavirus, 2020 Gave Us A Lot To Like About Whiskey
Cheers to the Dads! Personalize a bottle of his favorite whiskey to create a modern gift for the modern man. Use code: FATHERSDAY20 for $20 off your next order of $100 or more at ReserveBar