Bluegrass Distillers recently announced it is releasing what it says is the first-ever Kentucky Blue Corn Bottled-in-Bond Bourbon.

The bottling is the product of a single distillery from a single distilling season, aged a minimum of four years in a federally bonded warehouse, and bottled at 100 proof or 50% alcohol by volume. Aged 4.5 years with a mash bill of 75% blue corn, 21% wheat, and 4% malted barley, this new release has notes of caramel custard with hints of tobacco and anise spice, according to official tasting notes.

Bluegrass is the only Kentucky distillery that produces a wheated bourbon with 100% blue corn. It is currently growing 25 acres of blue corn, or roughly 500 barrels, in Woodford County. The non-GMO corn is grown in Central Kentucky with the help of a local farmer and contains a higher sugar content that lends a subtle butterscotch sweetness to the nose and earthy, pecan notes on the palate. 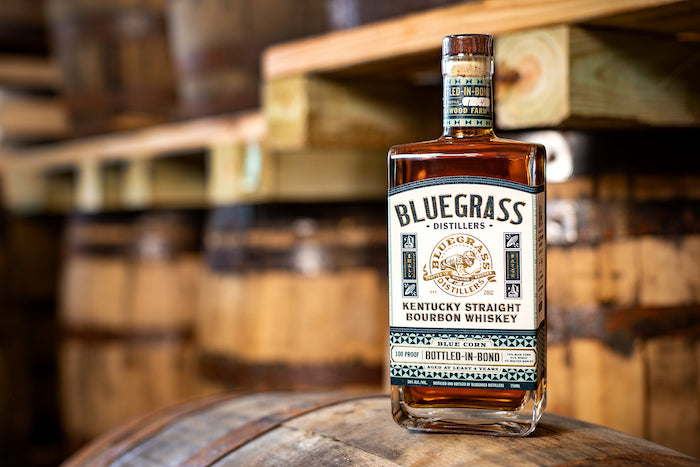 “The blue corn bourbon started in 2016 in a crock pot as an experiment with a group of chemical engineering students.We released our first blue corn bourbon on September 2, 2017. Four years later our team is bringing you what we believe is the first Kentucky blue corn Bottled in Bond ever released,” Co-founder and owner of Bluegrass Distillers Sam Rock said in a prepared statement.

“It’s a bourbon landmark, and it wouldn’t have happened without the dedication of our team.  I’m loath to brag, but I can brag about this bourbon.  It’s good.  It is what we hoped it would be. This first batch is a Kentucky and online only limited release, so we hope you get an opportunity to pick up a  bottle. We thank you for all your support over the years.”

Bluegrass Distillers Blue Corn Bottled-in-Bond (750ml) is available now for a retail price of $60 online through Bourbon Outfitter and distribution in Kentucky.