Blue Run Spirits, which made a splash in the headlines when it was unveiled they were in collaboration with former Four Roses master distiller Jim Rutledge, recently unveiled its Spring release after it won Best in Class and a Double Gold Medal at the San Francisco World Spirits Competition.

Launching as ten separate limited-edition bottlings from ten different barrels (a number of which have already sold out), the Blue Run 13.5-Year-Old Single Barrel Cask Strength Bourbon contains what’s described by the brand as its characteristic smooth and mellow flavor; a long, sweet and dry finish; little to no burn on the back end – even at cask strength – and a long tail.

Each bottling comes hand-numbered to denote the proof, barrel number and bottling date in a custom, handmade black lacquered wooden box. All ten barrels come from the same mash bill, yeast, still and warehouse, but how the liquid reacted to the wood and its position in the warehouse can change the characteristics of the whiskey. 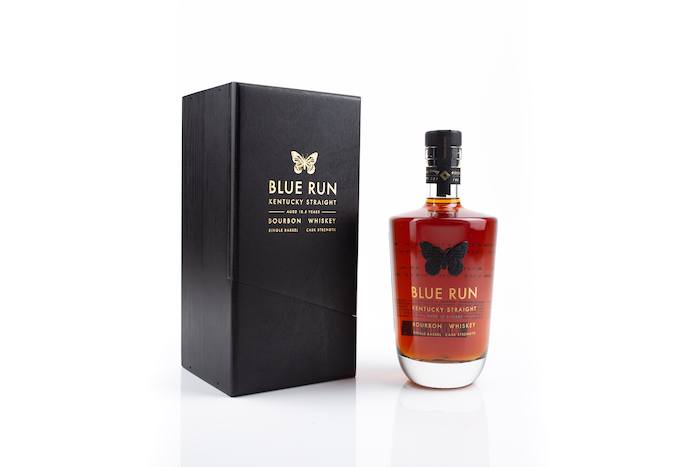 Though each barrel has its own subtle flavor differences, the liquid in each bottle will have a deep glow, streaked with bronze highlights; an alluring aroma of molasses and brown sugar with a toasted, nutty frame that reveals itself around baking spices and cocoa; and a long, sweet and dry finish wrapped in dark cherry highlights, according to official tasting notes.

“This limited-edition, high-proof release offers a uniquely customized experience based upon each whiskey fan’s palate, pairings and passions,” CEO of Blue Run Spirits Mike Montgomery said in a prepared statement. “While a bottle of Blue Run Bourbon will definitely stand out on your bar, it’s the flavor we are most proud of and glad to see experts like the judges at the San Francisco World Spirits Competition agree.”

Blue Run 13.5-Year-Old Single Barrel Cask Strength Bourbon will be found initially in Kentucky, California, Delaware, Georgia, Maryland, South Carolina, Tennessee, and Washington, DC, as well as online, but no state will receive bottles from all ten barrels. Each will get up to nine, encouraging collectors to reach out to friends to help get the entire collection. The product will also be available through Seelbachs.com, with bottles from a different barrel made available every few weeks. Seelbach’s will also offer a very limited number of ten-bottle complete sets.

The bottlings will be available for a suggested retail price of $229.99.