If there’s anything bourbon lovers can unite around, surely it is a shared love of corn. While corn comes in hundreds of varieties with distinct shapes, colors, and flavors, American demand for certain varieties has led to staggering homogenization.

American corn accounts for 32% of the world’s corn production, making us the largest global producer of corn. And while in 1903 there were over 300 commercially available varieties of sweet corn alone in the U.S., by 1982 just 12 of those varieties were found in the National Seed Storage Library.

Yellow dent corn, and genetic variations thereof, is not only the most widespread corn variety grown in the United States, it’s the leading commodity grain. The sweet corn grown for human consumption takes a backseat to the massive amount of yellow dent corn we grow for animal feed, ethanol production, and myriad other industrial uses.

Yellow dent corn also happens to be the corn used, generally speaking, in the production of all American corn-based whiskies and bourbons. Yet deviations from the yellow dent corn trend do exist, such as Woodford Reserve Master’s Collection 1838 Style White Corn release, Kings County Distillery’s use of all organic New York state corn, and inspiration for this very article: Balcones’ blue corn whiskies. 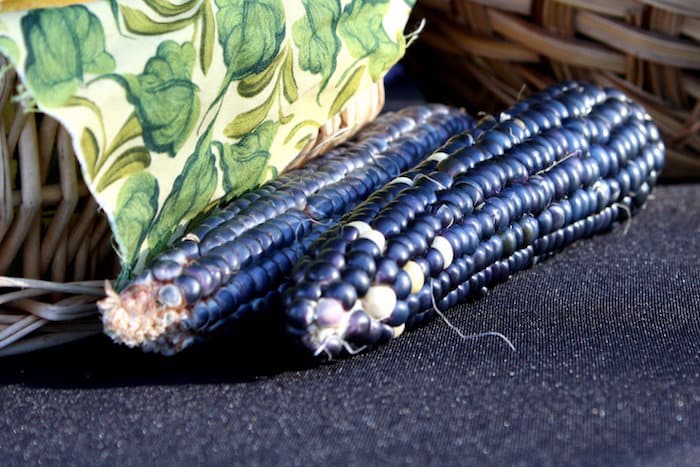 Blue corn – not something you’ll see that much at the store.

In my search for information regarding blue corn and its defining flavor characteristics, I found very little definitive information. One article from New Mexico State University suggested that blue corn, when ground for human consumption, had a “sweeter, nuttier” flavor than yellow or white dent corn. These are exactly the sort of descriptors I was given by each distiller of blue corn.

While the flavor qualities of raw grains prior to mashing and distilling aren’t usually described as transferring so directly, the case of blue corn appears to be unique. As Wood Hat Distillery’s Gary Hinegardner asked so succinctly in our interview, “Why don’t we make whiskey out of something that people have [traditionally] eaten?” as opposed to the commodity crop yellow dent corn we currently use to make whiskey—the same corn we use for Doritos, high fructose corn syrup, and fattening up feedlot cows.

While I am not as confident in brazenly stating, as Hinegardner does, that commodity corn “makes bad tasting whiskey,”  I do agree that we are “in the taste business,” so should the number one goal not be taste? And so here I am, writing this article about blue corn and the politics of corn—because of one taste that I remember so distinctly: Balcones Blue Corn Bourbon.

In the spirit of blue corn and all it has to offer the whiskey world,we have looked far and wide to obtain and review what the U.S. has to offer in terms of blue corn whiskies. We found the following as of when this article was published:

*made with blue corn, but not 100% blue corn mashbill

Since I have already reviewed Balcones’ Blue Corn Bourbon, and another writer has recently reviewed True Blue, I won’t re-review Balcones here. Considering the age range of these whiskies (1-26 months), I am discounting color entirely in my reviews. Many of the very young whiskies of this bunch were very dark, which aroused some suspicion and caused me to make this decision.

As in my last capsule review entitled The Olds: A Whiskey History and Tasting Exploration, I will be going from from worst to best; here is my roundup and rating (from 1 to 5, with 1 being undrinkable even in dire circumstances, and 5 being a perfectly respectable whiskey to share with friends without shame) of these whiskies. 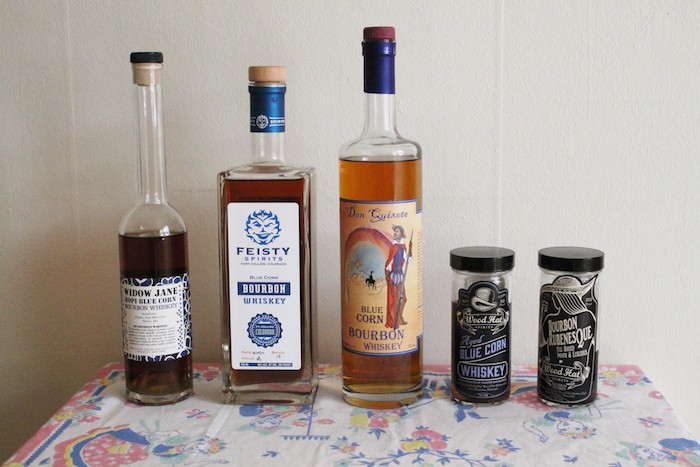 Some of the blue corn bourbon reviewed (image via Savannah Weinstock)

As the most expensive bottle of the bunch, ringing in at $136 for 750ml (about $25 more than my dear Balcones Blue Corn Bourbon), I assumed that Widow Jane would pack a serious punch. Pot-distilled in Brooklyn, bottled at 45.5% ABV, aged 10 months, and with a mashbill of organic Hopi blue corn, barley, and rye, there was certainly potential here. The strong burnt caramel, rubber pencil eraser, and pink housing insulation notes on the nose weren’t a fair enough warning for this whiskey, which somehow only got more challenging.

Widow Jane, from start to finish, tasted like a millennial outlaw road trip—from the Lucky Charms and watered down Coca Cola syrup at the start, to the stale cigarette and sunscreen mid-palate, to the stale toast of the limp, rubbery finish. Overall, this whiskey tasted like motel rooms. I was very disappointed with the fake sweetness, flat body, and obvious youth of this whiskey.

While this whiskey certainly inspired some flavor analogies I never dreamed I would write, it was no fun at all to drink.

Made with organic blue corn and rye, bottled at 44% ABV, and barrel aged “at least one month,” Feisty had me doubtful from the start. Take into account the ski-bro aesthetic of their labels, and my concern only grew. On the nose, Feisty emits a certain “whiskey-flavored vodka” scent, charred caramel, and fake vanilla. Oddly, Feisty smells like cooked carrots after opening.

On the palate, pixie sticks, “wood” flavoring, and under-baked snickerdoodles come out. The palate ends with a bowl of Honey Nut Cheerios with a heaping pile of cinnamon sugar poured on top. The finish is a la “Cinnamon Challenge”, with bitter, cinnamony, metallic notes dominating until you have the decency to swish them away with something else.

At the end of the day, Feisty makes for a pretty decent flavored vodka; however, for a bourbon it sits somewhere below Absolut Oak. This is not a bourbon by any stretch of my imagination. It is altogether too sweet, and has little depth or reference to what we expect bourbon to taste like.

Distilled from “Native New Mexico blue corn,” desert aged in American Oak, and finished in French Oak, Don Quixote appears to offer something different than all other blue corn spirits out there. Very sweet and tropical on the nose, obvious notes are prickly pear, nail polish, and orange segment. With a little time, the nose transforms from desert oasis nail salon to the one and only orange powder beverage known as TANG!

Of all of the blue corn bourbons, Don Quixote was by far the strangest. Again, Don Quixote didn’t strike me as a spirit that fit into the bourbon category, but was a spirit I found to be highly enjoyable nonetheless. I would blend it into a prickly pear slushie any day of the week.

The only whiskey I could think of that has at all similar characteristics is Koval’s Millet whiskey, which has bubble-gummy notes that I find charming and intriguing, but many whiskey enthusiasts detest. If you enjoy wacky, experimental drams, Don Quixote might be right up your alley.

Aged a mere four months in toasted 15 gallon Chinkapink Oak barrel, and bottled at 40% ABV, Wood Hat’s 100% blue corn whiskey has a lot of interesting factors involved in its production. The majority of Wood Hat’s barrels are made locally from Chinkapin Oak staves that were cured outside for three years. Incredibly nutty on the nose, Wood Hat smells like a maple and butter drenched nut-studded cinnamon roll fresh from the oven. Warm and toasty, the nose also has a slight Scotch tape scent to it.

Dryer on the palate than the nose, the dram’s low proof becomes very obvious. Again quite nutty, the palate is a soft, mild, walnut-forward experience. Peanut butter cookie dries out the palate, leaving a very subtle toasted nuttiness.

Drinking Wood Hat Aged Blue Corn Whiskey is like drinking soft, walnut-scented air. I could finish a bottle of this and not even notice I was drinking. Finally, a blue corn whiskey that sports a hefty amount of the “sweet, nutty” qualities apparently so typical of blue corn! Personally, I would love to see what this whiskey tastes like at a higher proof, or after aging for some more time. Bringing these flavors up a notch might prove very interesting.

Although not available for sale, I was able to sample another blue corn offering from Wood Hat, which so perfectly embodied what I believe blue corn has to offer that I couldn’t not share it. When I requested a sample of the Aged Blue Corn Bourbon, Wood Hat sent a few other samples along as well. The standout of the bunch was one that the Master Distiller had pulled for me: his usual Bourbon Rubenesque, which is a blue corn and wheat bourbon aged in charred 15 gallon Chinkapin barrels, but this sample was one that had been aging for 26 months and was cask strength (125 proof).

Rich, brown butter on the nose marry perfectly with toasted nuts, caramel corn, and bright red candied apples. Grilled bread compliments the complex, earthy, nutty nose. Somehow, despite the high ABV, there is no ethanol bite on the nose. The rich warmth of the nose follow through to the palate, leading with croissants and salted high-fat European butter on almost burnt toast.

Full bodied, slightly tannic, and decadently salty, the palate has a lot to offer. Each element in place, the palate rounds out with notes of seared well-marbled steak covered in black pepper, red pepper flake, and a big butter dollop. This finish is again buttery, peppery, and tastes of dry popcorn.

Drinking this iteration of Bourbon Rubenesque (the typical expression is aged 6 months) fulfilled all of my dreams for the Aged Blue Corn Bourbon, and left my mouth watering. More than just fulfilling my dreams for Wood Hat’s offerings in particular, this whiskey fulfilled what I had been searching for since I first tried Balcones.

Both an equal match in deliciousness and character, Wood Hat, like Balcones, does a lovely job of expressing what blue corn can do. Nutty, complex, earthy, and intense, Wood Hat’s Bourbon Rubenesque and Balcones’ Blue Corn Bourbon make me excited for what American craft distilling can do with grains other than the expected, and with a fierce idealism and expectation for quality.

This article led me to drink a wide variety of whiskies ranging from nightmarish to dreamy, but moreover led me to question why we use just one single kind of corn for so many industrial tasks, from animal feed to fuel to whiskey, when there are so many unique and delicious grains out there. The use of yellow dent corn, for most distillers, is an afterthought—simply a means to an end. In this American whiskey renaissance, I do not believe that any step of the whiskey production process, and especially not the grain we use to create the juice we love, should be assumed.

Blue corn has an incredible amount of potential to make delicious whiskey, but so do other grains, from Bloody Butcher corn, to triticale, to millet. If we continue to consume whiskies made with utilitarian yellow dent corn without stopping to question why, who are we to deserve a drink in the first place?