In 2014, Rempe decided to create a bourbon using a blend of three unique Kentucky straight bourbon whiskeys. The next year, the Blood Oath series was created. The name, according to the brand, refers to a promise Rempe made to keep the blend of the Kentucky straight bourbon whiskeys a secret an to create what he feels is the best bourbon for bourbon connoisseurs.

The 750 ml bottles of Pacts 4, 5, and 6, make up this latest Trilogy, and the collection has a limited supply of 1,400 sets each priced at $799. The newest Blood Oath Trilogy will be available in late Sept. 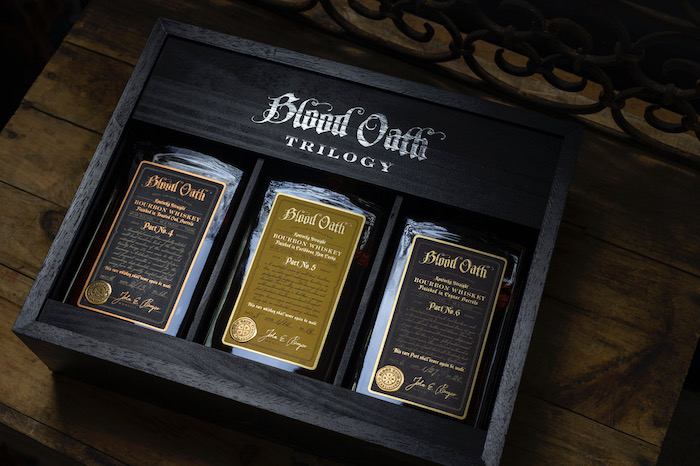 Every year, Rempe adds a new Pact to the Blood Oath family. Each Pact comes in at 98.6 proof and has 49.3% alcohol by volume. The second Blood Oath Trilogy is packaged in a black wooden display box designed to highlight each Pact’s distinctive label.

Blood Oath Pact 4 is a blend of an extra-aged 12-year bourbon, a 10-year bourbon and a 9-year bourbon finished in toasted barrels for several months. It has what’s described as an ultra-smooth finish with notes of caramel, vanilla and oak.

Pact 5 is a blend of a 13-year mahogany colored bourbon, peppery with dark chocolate shavings, an 11-year old wheated bourbon, rich with vanilla and honey; and an 8-year bourbon finished in Caribbean rum barrels to impart what’s said to be orange, brown sugar and warm island spice notes.

Pact 6 is a blend of a 14-year ryed bourbon which provides oak and leather undertones, an 8-year old toasty ryed bourbon that delivers hints of spice and a 7-year old ryed bourbon finished in cognac casks to produce a fruity, brandy flavor.

“I look back on each Pact I’ve created for the Blood Oath Series with a tremendous sense of pride and accomplishment, and with each new Pact I develop, I become more eager to create the next,” Rempe said in a prepared statement. “The bourbons I’ve selected to create each Pact are becoming rarer and harder to find, as are the resulting Pacts themselves. A Blood Oath Trilogy set is like a piece of bourbon history. I’ll never repeat a blend, so once it is gone, it’s gone.”