A few years back spirits giant Diageo unveiled its Blade and Bow bourbon line, which included both the regular release and also a 22-year-old variant which was limited edition. It is pretty much near impossible to find the latter one at retail now a days, which thus means it is time for a new batch of it to be released, at a slightly higher price point of course!

The 2017 version of Blade and Bow 22-Year-Old bourbon, according to Diageo, will price around $200, whereas when it was first released back in 2015 it priced at $150. The re-release of Blade and Bow 22-Year-Old is said to to honor the 82nd anniversary of the opening of Stitzel-Weller Distillery, and is being released just like it was two years ago just as Kentucky rolls into Derby time.

Information provided by Diageo on this release suggests this over two decades old bourbon is “inclusive of whiskeys distilled at both the distillery historically located at 17th and Breckinridge in Louisville, Ky. and the distillery historically located at 1001 Wilkinson Blvd. in Frankfort, Ky. [It] was most recently aged and bottled at Stitzel-Weller.” 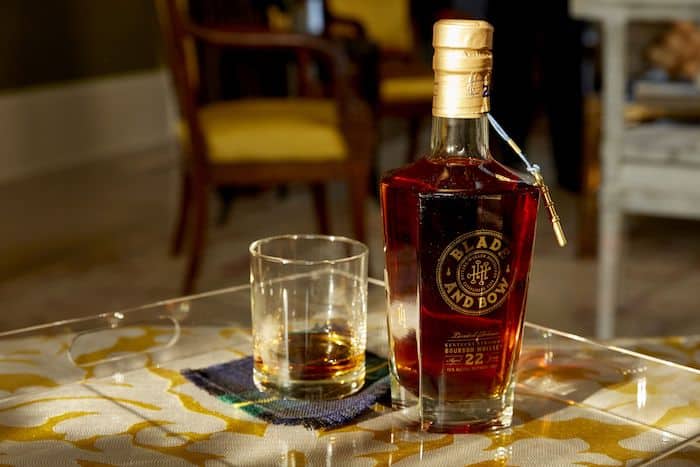 As with previous Blade and Bow releases, it comes packaged in a geomoetric bottle with six sides – one bearing the Blade and Bow logo and product information, with the other five representing each of the five keys to bourbon found throughout the Stitzel-Weller distillery. Five different keys – some rarer than others – will adorn the bottles, with consumers being encouraged to collect all five.

In case you’ve ever wondered about the origins of the Blade and Bow name, Diageo said it is “named after the two parts of a skeleton key – the blade shaft and the ornate bow handle – part of the iconic Five Keys symbol found throughout the legendary Stitzel-Weller distillery.  These keys represented the five steps of crafting bourbon – grains, yeast, fermentation, distillation and aging.  More importantly, these keys grew to symbolize the southern traditions of hospitality, warmth and enjoying the finer things in life.  To this day, the five keys can be found throughout the distillery.”