Texas whiskey brand Ben Milam Whiskey, produced by Provisions Spirits, has built a bit of a buzz for itself with its decent whiskeys, good looking bottle designs and the recent hiring of noted whiskey expert and blending consultant Heather Greene as its CEO. The folks behind it are now making another big tent style move, debuting a new premium line up of whiskeys known as Milam & Greene Whiskey.

The new Milam & Greene Whiskey brand, according to those behind it, is notable for the fact, if nothing else, that it makes at least partial use of the distillery’s first grain-to-glass spirit in one of its offerings. It is a big step forward for Provisions Spirits, being a bourbon, noted partner Marsha Milam, that “has been aging in our rickhouse for more than two years.” It is blended into a larger straight bourbon release, of which more details about it are further on in this story.

The Milam & Greene Whiskey team, besides Greene herself, also includes Kentucky veteran master distiller Marlene Holmes, and Texan bred chief brewer Jordan Osborn. The three have been working in tandem on the whiskeys under this label, with Osborne brewing the mash for the bourbon with a proprietary yeast recipe from Texas and Kentucky; Holmes distilling spirit in a 300-gallon Vendome copper pot still and Greene picking bourbon casks from other states for the blend. 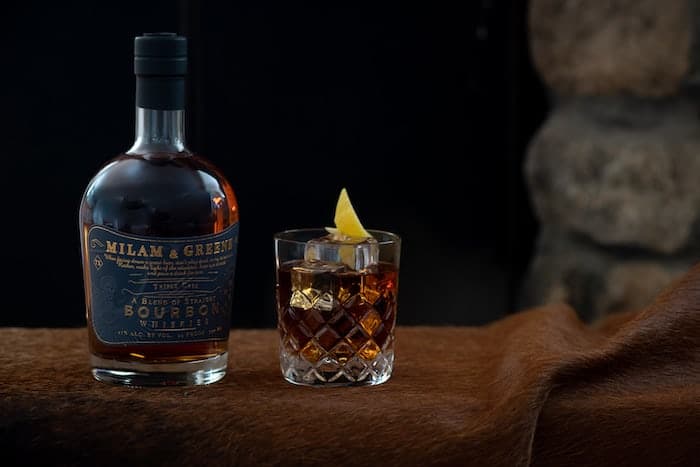 As for the specifics of the initial releases, details are as follows, based on information from the distillery.

The new flagship bourbon is made from 70% Texas corn, 22% Pacific Northwest malted rye from Oregon and Washington, 8% Wyoming barley, and our proprietary yeast recipe from Kentucky and Texas. Each bottle of Milam & Greene Triple Cask is a batch of three hand selected straight bourbon whiskies: 2-year-old premium Texas bourbon for a pop of spice married with 3 to 4-year-old Tennessee whiskey for vanillas and fruits, and 10 to 11-year-old Tennessee whiskey for structure and tannins. It is then proofed to taste and bottled on site.

This bourbon has a deep golden color, along with refined and elegant aromas with pops of vanilla, floral and spice. The palate is creamy and soft, surprisingly smooth for a 94-proof spirit, and has a medium warm finish, with structure and tannins.

Milam & Greene Port Finished Rye Whiskey is brought from Indiana to Texas where it is batched in the Blanco rickhouse and finished in old Port wine casks from Portugal. The Texan sun influences the rate and strength of flavor imparted into the whiskey. Some casks take longer than others, so the expert team tastes the whiskey finishing the in the Port wine casks regularly to determine when optimal flavors are achieved. Casks are then batched together and proofed before bottling.

The result is a gorgeous ruby colored rye with luscious aromas of cinnamon, chocolate, dark fruits such as black currants and blackberries. Robust flavors are carried in a rich, velvety whiskey with a long warm finish.

“We set out to make a whiskey for whiskey lovers who are as serious about taste as they are passionate about the people who create it,” said Greene in a prepared statement. “Each bottle of Milam & Greene captures the very best of the total American whiskey experience with grains from across the U.S., exquisite Texas limestone filtered water and climate, whiskey aged to optimal maturity in pristine casks and an incredible whiskey making team in Texas.

Our own spirit distilled and aged in Blanco, Texas is the core of our Triple Cask Bourbon. We will continue to age it in Texas and will also send some to age in other states to see the effect of climate on our whiskey. We are on a mission to determine the factors that contribute to making the very best whiskey possible. Milam & Greene is a true American whiskey with a Texas heart.”

As it stands now plans call for both whiskeys to be available initially in Texas. The bourbon retails for around $43, while the rye finished in port rye casks prices around $48.