Before There Was Bourbon: Spirits In The Frontier Days

Kentucky was the first American West. In the 1770s, settlers started coming to Kentucky, traveling either through the Cumberland Gap or down the Ohio River. They had to bring everything they needed to live and prosper, and for many, that included stills.

Distilled spirits were a very important part of frontier life. These new Kentuckians worked hard from dawn to dusk. They had to build cabins and barns. They had to clear fields and plant crops. They had to care for livestock. There was always something to do, and it usually called for heavy labor, so when they awoke in the morning they would start the day with a drink of distilled spirits to ease the aches from the labors of the day before. 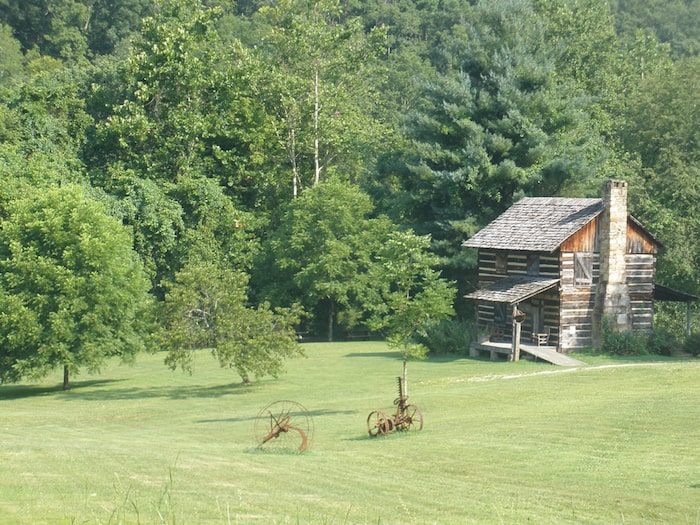 Life on the frontier (image via David Glasson/flickr)

This was a time before there was bourbon as we know it, the aged spirit stored in charred oak barrels. The first written record of bourbon in Kentucky was 1821. There was a period of about fifty years were Kentuckians were distilling spirits other than bourbon. To better understand the evolution of bourbon, these years have to be examined and understood.

The stills used were pot stills usually about 100 gallons in size. These stills had to be brought into the state, so they had to fit on a wagon or flatboat along with the other possessions of the settler family. Some stills were as small as 20 gallons and others as large as 200 gallons, but the average was about 100 gallons. They were usually made of copper, but once in Kentucky some settlers made parts from hollowed-out logs. In a pinch, a temporary still could be made completely out of such materials. Wood was the fuel used to heat the still, and spring water was used to cool the worm.

Mash tubs were usually about 50 gallons in size, a manageable size for one or two workers. They would cook and ferment in the same tub, using hot water to do the cooking as they added the grain. The yeast would be added after the cooking was done. The earliest distillers used the term “Distiller and Yeast Maker” to describe their profession, because to these people, making the yeast was at least as important as the distillation process.

Knowing a good yeast from a bad one was important to the final product, so the yeast maker would capture several yeast strains and let them mature enough so that he could smell the alcohol being produced, and then pick the strain to be propagated. Some distillers used a sour mash process, using spent mash from the previous run to “sour” their next batch. Some would actually use this hot slop as well as boiling water in the cooking process of the grains.

The mash would be made from the grains at hand, and in Kentucky, that meant corn, the most plentiful grain available. Rye, wheat, and barley malt were also used to flavor the corn, creating the mash bill. Fruits were also fermented for brandy production. Fruit brandies such as apple, peach, and pear were very popular in Kentucky, and many distillers made both brandy and whiskey. Brandy has to be made when the fruit is ripe for making wine, usually in late summer. Whiskey was made in the fall and winter, as grain can be held longer for making the beer for distillation. These wines and beers would be distilled, and the distillate would be stored in stoneware jugs.

Barrels are not a practical storage vessel for distilled spirits unless the distillery is making a large amount of spirits. The frontier distillers were using stills of only about 100 gallons, and a day’s work usually produced about 6-8 gallons of spirit. This amount was easier to store in jugs. Since the spirit was often used to barter for other goods, jugs were also more practical than 48 gallon barrels. A quart or half gallon jug could be traded for smaller purchases. Another disadvantage to a wooden barrel is that the wood soaks up about three gallons of spirit when it is filled. That is about a half day’s work for the distiller. Since the spirit was an unaged product, jugs were much more practical and economical.

Once the spirit was made, many things could happen to it before it was consumed. At the Filson Historical Society, there is a description in the Beall-Booth family papers of a charcoal mellowing vat used to take the rough edges off the new-make spirit. A 50 gallon barrel with a false bottom filled with holes would be filled with gravel and sugar maple charcoal. The spirt would then be run through this filter before being used to make other products.

Once it was filtered, there were recipes for making gin, blackberry cordial and cherry bounce. Gin was made by adding essential oils such as juniper and clove to the spirit. Blackberry cordial was made by adding fruit to the spirit and letting it steep for a while. The fruit was then removed, and the spirit was supplemented with oil of clove before being consumed. Cherry bounce was made by taking the root of a wild cherry tree and boiling it into a strong tea. Sugar was added to the tea, and then it was used to flavor the spirit. Fruit brandy was considered drinkable right off the still and drunk as an unaged spirit, but was also used to flavor unaged whiskey.

Frontier Kentucky had many distilleries making distilled spirits for personal consumption and trade. These earliest products were not aged in charred oak, and were often flavored before consumption. Once bourbon became the popular drink, many distillers started to age their whiskey and brandy. The term “apple jack” comes from the fact that western distillers were aging their apple brandy in barrels made for whiskey rather than the larger, traditional barrels used for fruit brandies in Europe.

Even so, many of the unaged products survived throughout the first half of the 19th century with the smaller farmer distilleries. It would take the Civil War and the return of the whiskey excise tax to force these small distilleries out of business and relegate the unaged products, such as cherry bounce, to the home distiller making products for self consumption.

211
Shares
641
Views
Share on FacebookShare on TwitterGet Our Newsletter
Get The Glenlivet 18 Year Old at ReserveBar. Shop now!