Anthrax Offers Up A New Bourbon For Its 40th Anniversary

The band Anthrax – Scott Ian, Frank Bello, Charlie Benante, Joey Belladonna and Jon Donias – have celebrated its 40th anniversary since festivities kicked off in late April. And even with the official anniversary date being July 18, there’s a bit more saluting to do for that milestone.

And with that, the band recently announced the release of its 40th anniversary commemorative bourbon “Anthrax XL” (Roman numerals for 40), a Solera-aged, single-barrel expression finished for 40 days in a 20-year old Oloroso Sherry cask. 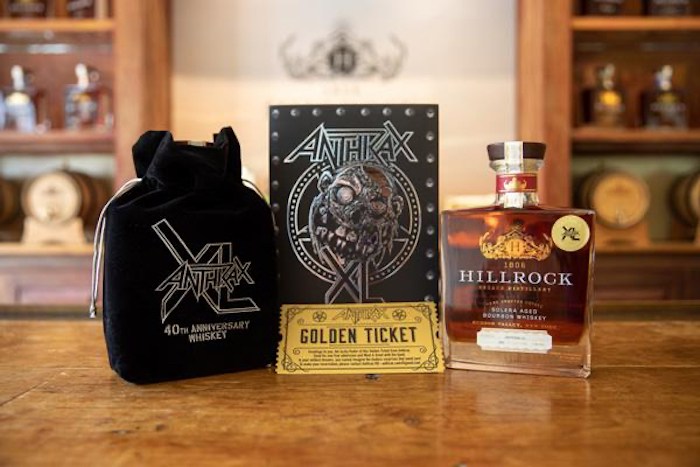 Only one barrel of “Anthrax XL” has been produced, yielding 400 hand-numbered bottles at a cask strength of 115 proof.

Each bottle features the band members’ signatures, and is encased in a black drawstring velvet gift bag emblazoned with the Anthrax XL logo. It carries a suggested retail price tag of $155.

Additionally, 40 limited edition numbered bottles will be available. Priced at $350, each limited edition bottle is also housed in a black drawstring velvet gift bag, imprinted with the Anthrax XL logo, then packed in a customized box encased in a silver-foil cardstock wrap-around.

Each limited edition item comes with a Golden Ticket, printed and embossed on gold-foil cardstock. The Golden Ticket awards the purchaser and a guest admission to an Anthrax headline concert in the purchaser’s area and includes a special in-person meet and greet with the band to take place during Anthrax’s 2022 U.S. tour.

In July, Ian and Bello visited the Hillrock Estate Distillery for a series of tastings to find the perfect elixir, which they said would be “Anthrax XL” worthy.

“I had a great time up at Hillrock,” Bello said in a prepared statement. “Everything there is homegrown, and all done by hand. Jeffrey, Cathy, Alex, and everyone who works there are all really nice people who care so much about what they do and how they do it. I’m very happy with our Anthrax XL whiskey. It’s smooth, has a great aftertaste, and creates a great vibe.”

Scott Ian said he sampled eight different whiskeys from Hillrock’s rickhouse, and found picking just one to be a difficult task. “They’re all so great, thieved from the barrel and into my glass. Every time I had to choose a whiskey, I wait for the juice to tell me that, ‘it’s the one.’  This barrel spoke up loud and clear.”

On the nose, he said, there is caramel, toffee, and butterscotch with hints of dried cherries and fresh herbs. The palette has a rich texture of bright red fruits, baking spices, and toasted almonds.

Anthrax XL is the band’s most recent collaboration with Hillrock Estate Distillery, located in the Hudson Valley Highlands in New York State. The distillery was built from the ground up by husband and wife Jeffrey Baker and Cathy Franklin along with the late Master Distiller Dave Pickerell.

For more information or to purchase a bottle of “Anthrax XL,” check out https:www.12west58wine.com.

74
Shares
1.6k
Views
Share on FacebookShare on TwitterGet Our Newsletter
Get The Macallan® Rare Cask at ReserveBar. Shop now!