Another Buffalo Trace Special Whiskey Set To Be Fundraiser For Charities

Buffalo Trace a few years back decided to offer up a special selection of some of its older whiskeys for charities to make use of for raising donations. This proved to be a runaway success for all involved; in fact, it was to the tune of over $1 million raised for a range of different causes. Now plans have been announced for another bottling to be handed off to non-profits, consisting of bourbon drawn from the six millionth barrel laid to rest in the distillery’s aging warehouses.

This special Buffalo Trace 6,000,000th Barrel Bourbon release, according to those behind it, is drawn from a barrel that spent over a decade resting in Warehouse V, said to be the world’s only bonded, single barrel aging warehouse. This barrel was replaced a little over a year ago in that facility by the seven millionth barrel produced since Prohibition there. This now 10 year, 11 month old American whiskey was divided up into 400 375ml bottles, with each bottle having a handwritten description on its glass and also being “packaged in a numbered hardwood showcase box that includes a piece of the charred oak stave from the historic barrel and small brochure explaining the significance of this collector’s edition.” 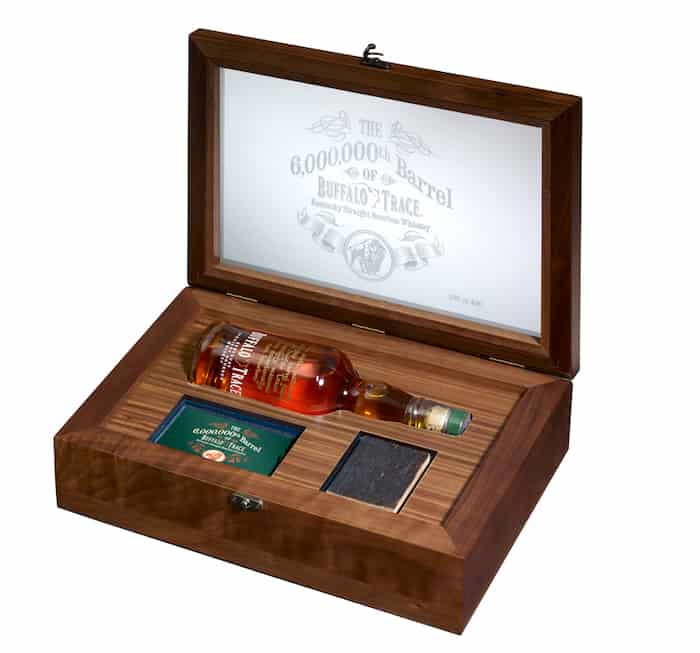 “We’re thrilled to be able to do something with the bottles to help those in need,” said Kris Comstock, Buffalo Trace senior marketing director, in a prepared statement. “We decided on the 375ml size bottles, rather than a larger size, to allow for more bottles so we can help more charities. We really hope whiskey enthusiasts will help some deserving non-profit groups raise serious money. These bottles are beautiful, the package is first class, and the bourbon tastes amazing. Our goal is to raise $500,000 for charity!”

As for how charities might be able to get hold of one of these bottles, the distillery noted the bottles will be given free of charge to those organizations that “submit an official U.S. non-profit tax ID number and auction the bottle within the 2019 calendar year. Applications will be taken online only at www.6millionthbarrel.com  Recipients of these bottles shall be notified by email in early July.  Bottles will be shipped free of charge in August 2019 and recipients will have until Dec. 31, 2019 to auction the bottle.  Non-profit organizations can submit their request for a bottle online at 6millionthbarrel.com … the cutoff date to submit an online application is July 1st, 2019.”