Special release whiskeys too often have uninteresting—even contrived—backstories. This summer’s Angel’s Envy’s special release bourbon is an exception to that rule. Not only is the whiskey terrific, the story behind it is, too.

Some basics on this bottle: Its press release name is “Founder’s Day 10th Anniversary release, Angel’s Envy Kentucky Straight Bourbon Whiskey Finished in Japanese Mizunara Oak Casks.” Granted, that’s a mouthful, but it bears describing: The Founder’s Day part is a nod to co-founder Lincoln Henderson, who died in 2013, while the 10th anniversary part marks the distillery’s first full decade in business.

The exciting part of the name is the mention of Mizunara oak casks. These barrels are made from Japanese oak (quercus mongolica for wood nerds) that grow 200 years before harvesting. That’s nearly four times longer than the maturity required of American oak (quercus alba, if you care). 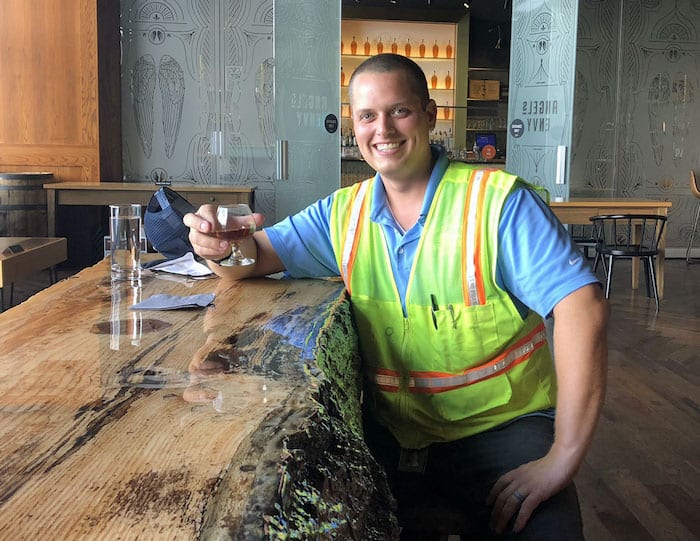 Coopering Mizunara is highly challenging since the wood grain is neither straight like American oak nor as malleable. The wood is also porous, which compounds unwanted effects like leakage and angel’s share. But wait, there’s more awfulness! Each fragile Mizunara barrel shipped to Angel’s envy cost $3,500 each—about 15 times the cost of an American oak barrel. That fact alone may help you begin to understand its $350 sticker price.

“It took us five years to get these barrels,” said Angel’s Envy production manager, Kyle Henderson. Merely locating any used Mizunara barrels was a painstaking chore. Fortunately, it ended with Louisville’s Kelvin Cooperage connecting him to Ariake Sangyo cooperage in Japan, which agreed to make new barrels for Angel’s Envy. No second-use barrels in this release, which is a first for the brand.

“When they arrived, each barrel was lashed to a palate,” Henderson said. “They’re so fragile that if they bump into each other during shipping, they can break. And since it’s such a porous wood, the staves are twice as thick as we normally see. So, the (53 gallon) volume of barrel is same, but its dimensions are much larger.”

When Henderson opened the barrels, he was pleased and confused by the sight: happy Ariake Sangyo charred and toasted them but wondering to what extent. Pleased to learn the cooperage’s specs were equivalent to a medium toast and No. 3 char, he began filling the barrels with a blend of 4-year-old and 9-year-old bourbons.

“I knew going in that Japanese oak tends to age slower, so I figured a year would do it—double what we’d do for our port-cask finished bourbons,” he said. Yet after a year’s rest, a sample of left him underwhelmed. “We’d taste and think, ‘Well, it’s got some wood in it, but it’s not special enough to release.’”

That changed six months later, when the Mizunara’s characteristic smokiness appeared alongside of aromas of incense, sandalwood and spices. By the two-year mark in June, the bourbon had developed a spiced apple aroma that pleased Henderson enough to dump it for proofing. Those barrels didn’t even dry before they were refilled with bourbon. 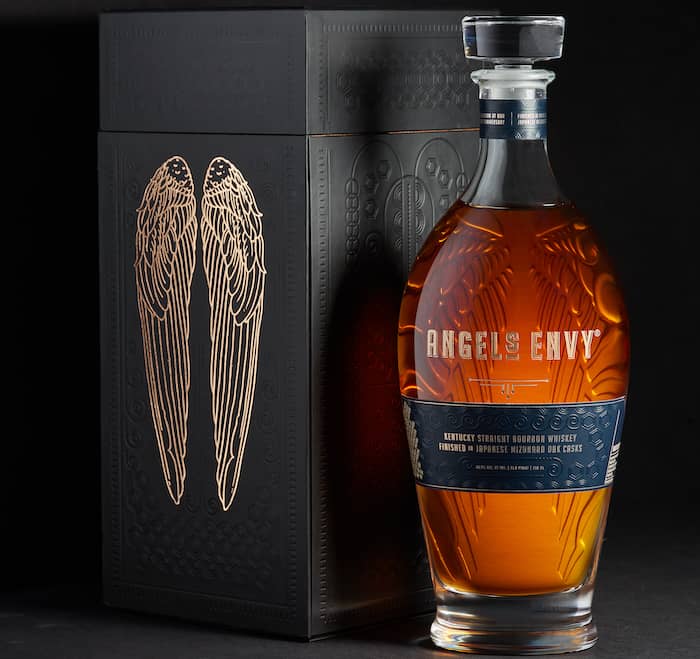 “This release is just round one of how many times these barrels will get used,” Henderson said. “It took me five years to get them and they cost a lot, so I’m going to keep them around for a while. … We think it’ll be a half decade before anything comes out of these barrels again.”

“Outage, leakage and angel’s share were significantly higher than normal for us,” he began. “For us, a 4- to 5-year-old bourbon in American oak will lose 22 percent. In the mizunara casks for two years, we lost 38 percent.”

Nearly twice as much loss in half the time. Another reason to understand that high price tag.

Out of the cask, the bourbon registered 121 proof. As proof was lowered, two standout levels emerged: 102 and 97.8. Ultimately, the lower proof was chosen and 1,285 bottles were filled. Henderson joked that he rounded the count off to 1,200 by placing 85 of those bottles in his personal collection.

But in reality, most of them were assigned to the Angel’s Envy “library,” which holds bottles for tasting panel reference, charitable donations and auctions. Early on in the life of Angel’s Envy’s, the distillery team learned a difficult and costly lesson about not reserving many bottles of every significant release.

“That happened with one of our cask strength port barrel releases,” he began. After a reviewer praised it, enthusiasts cleared the shelves and left none for the future. “We were new and just trying to make some money, so we sold all we had! … We later had to buy back some bottles from people we knew who had them. Of course, we paid high prices to get them back.”

The final package for the Mizunara release is an elegant and distinctive crystal decanter destined to be a refillable centerpiece on any bar. Sadly, it’s not likely you or I will see one of these soon in the wild, if ever. A sizeable portion of those 1,200 bottles was offered to the 500 Main Club, Angel’s Envy’s free “club” that allows members first dibs on releases and events. Like locusts on a ripe crop, the horde depleted its allotment in about an hour. Other bottles will be released for sale at the distillery on Sept. 1. (Hmm, wait: I think I see the line forming now.)

FWIW, here’s how my sample tasted:

On the nose was clover honey, honey dew melon, cotton candy and toasted oak. (When I tasted with Henderson, he pointed out an intriguing back note of hops.) On the palate was ample honey, graham cracker, roasted tropical fruit and a lazy whiff of smoke. The finish was startlingly clean, disappearing and pleasantly so.

Subsequent sips delivered the delicate signature smoke note common to mizunara oak. Excellent all around and probably my favorite Angel’s Envy release. It’s an Angel’s Envy bourbon like you’ve never tasted, and if you don’t know somebody, may never taste.