Metallica. Scorpions. Slipknot. These three major bands all have one thing in common with regards to whiskey these days – they’ve teamed with distillers in recent times to offer up brown spirits associated with their brand. It is seen as a way by them to further connect with their fanbase, while at the same time having some influence over being tied to a whiskey that perhaps actually tastes quite good. The latest example in this kind of operation is legendary music group Alice in Chains tying up with Illinois distillery FEW Spirits on a new bourbon finished in ex-tequila barrels.

The new All Secrets Known bourbon whiskey, according to those behind it, takes FEW Spirits’ regular bourbon offering and finishes it for six months in ex-tequila barrels before bottling it at 1o1 proof (50.5% ABV). The idea in creating such an expression as a tie in to Alice in Chains is that “there no two spirits that have a closer association with rock and roll than whiskey and tequila.” The bourbon is said to be “a nod to the name of the opening track of Alice In Chains’ 2009 certified Gold release Black Gives Way To Blue.”

“Alice In Chains is part of one of very few movements that can be legitimately credited with shapeshifting an entire culture, beginning with their first album, Facelift,” said FEW Spirits founder and master distiller Paul Hletko in a prepared statement. “For us distilling, like making music, is about having the courage to ASK, ‘What if we…’ and being excited to find the answers – unlocking those secrets. Nobody sounds like Alice In Chains. 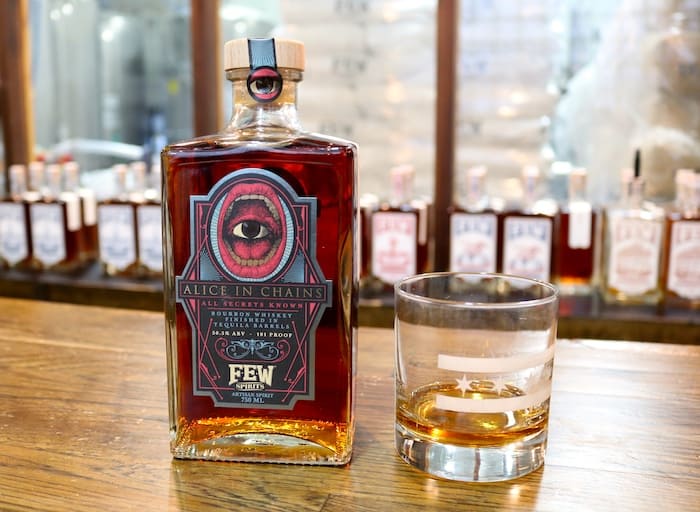 “We were inspired by their courage to create a sound that flouted convention and thought, ‘There are lots of tequilas finished in bourbon barrels, but it’s rare to find a widely-available bourbon finished in tequila barrels. Let’s do that instead.'”

The label design on the bottle, done by artist Justin Helton, is said to have found “inspiration in the name All Secrets Known. The eye in the mouth is a play on seeing all that’s been spoken. The color scheme is a nod to Black Gives Way to Blue, the album on which the song ‘All Secret Known’ appears.”

As it stands plans call for All Secrets Known to price around $75 per 750 ml bottle, and to be available as a limited release offering in CA, CO, IL, NY, and WA. Very limited official tasting notes suggest that “bold, sweet, and spicy bourbon top notes that have become the hallmark of FEW and led to multiple category awards, are accentuated by grassy agave undertones.”