The history of the Jim Beam distillery campus in Clermont, Kentucky is a long one, heralding back to 1935. The Beam story goes further back than that though, dating some 225 years. Over this time a number of Beam family distillers have left their mark, with current stewards  – Seventh Generation Beam Master Distiller Fred Noe and Eighth Generation Beam Distiller Freddie Noe – leading the whiskey making charge.

Now, as Fred Noe considers his legacy and further prepares his son Freddie Noe to be the eventual face of all things Beam, what has emerged is a new, more premium focused American whiskey distillery operation on the greater Beam campus. Known as the Fred B. Noe Distillery, it both honors the elder Noe and also marks a place in which the younger Noe can potentially take Beam whiskey in some new directions as he at the same time honors the heritage of his family.

The new Fred B. Noe Distillery, according to those behind it, will “produce several of the James B. Beam Distilling Co.’s well-known and award-winning brands, including Freddie’s acclaimed Little Book Whiskey annual series of blends, as well as future innovations.” These brands include Baker’s Bourbon and Booker’s Bourbon. 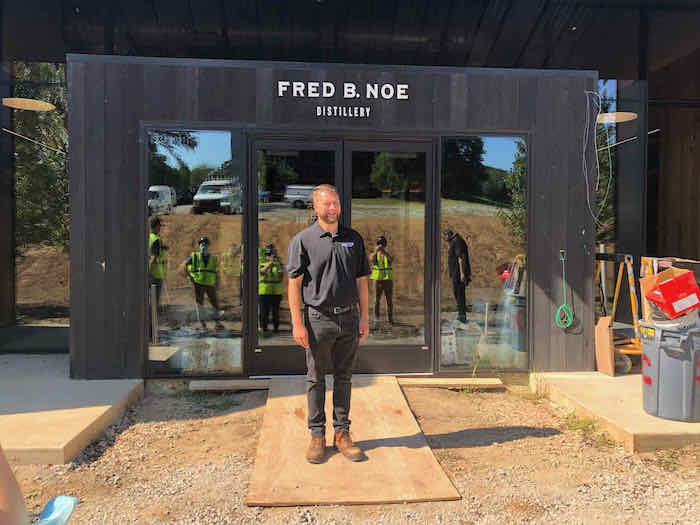 Freddie Noe in front of the Fred B. Noe Distillery (image copyright The Whiskey Wash)

It is also tied to the recently launched membership program Barreled & Boxed, which “will allow consumers to experience the distilling company’s most exciting releases straight to their doorsteps in select states, where legal.”

“Our new distillery is really the heart and soul of the Beam legacy,” said Fred Noe in a prepared statement. “Years ago after my dad, Booker Noe, created the original small batch bourbons, he looked to me to welcome more whiskey drinkers into our family of brands.

“Now as I look ahead, it’s with great pride that I hand the reins of this special place over to my son Freddie, and I look forward to working side-by-side as he leads the next chapter in whiskey making for the James B. Beam Distilling Co.

“At the new distillery Freddie will continue to experiment with new fermentation, distillation and blending techniques to produce category-defining and boundary-pushing whiskey of the highest quality. I can’t wait to see what he does with it, and I know that my dad is smiling down on us today.”

“This new distillery represents my family’s bourbon legacy – both where we’ve been and where we’re headed,” added Freddie Noe. “In this new home, I look forward to honoring all of my dad’s contributions and continuing to innovate and push the boundaries in American whiskey. Over the last five years, I’ve been exploring new and interesting blends, ages and flavors on my quest to build upon the legacy my dad and granddad pioneered.

“I’m eager to show the world what we’ve been up to, and to offer fans everywhere a taste of the special whiskies we’ve been cooking up.”

Besides being the new playground for Freddie Noe, plans call for the Fred B. Noe Distillery to offer “offer experiential learning through distillation sessions and seminars” with Freddie. Also in the mix will be hands-on activities in the blending lab, and a tasting bar to sample new and yet-to-be released innovations for select members of the trade.

Additionally, what’s described as “a state-of-the-art classroom” for the University of Kentucky®’s James B. Beam Institute for Kentucky Spirits will be housed onsite, “wherein future leaders in the American Whiskey industry will come together to learn the genuine whiskey making craft firsthand from the James B. Beam Distilling Company’s experts.”