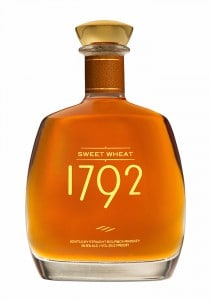 Another day, another mid-shelf bourbon brand getting an expansion. Yesterday we brought you world of Old Forester and its latest Whiskey Row Series bottling, 1897 Bottled In Bond, and today the light shines on the Sazerac owned 1792 bourbon label and its brand new Sweet Wheat variant.

Known officially as 1792 Sweet Wheat, this wheat-focused bourbon is made from a recipe featuring this grain, instead of the more typical rye, as the primary second ingredient alongside the traditional corn mashbill. Also included in the mix is malted barley and a yeast strain specific to Barton 1792 Distillery in Bardstown, Kentucky, where it was distilled in 2007, aged for eight years and bottled recently at 91.2 proof.

“Using wheat instead of rye gives the taste profile a softer and more delicate flavor,” said Ken Pierce, Barton 1792 director of distillation and quality assurance, in a statement. “The soft flavor is balanced by rich oak tannins extracted by the bourbon while aging in the charred oak barrels.”

Bottles of the Sweet Wheat are expected to starting appearing at retail this summer for around $33, which is close to the current average retail price of the regular 1792 bourbon. Tasting notes for it are below, courtesy of the distillery, and it should be noted as well further expressions of this brand are expected to be released in the coming years.

Hints of caramel, vanilla, and ripe fruit mingle with notes of deep oak tannins and tobacco. The elegant taste is followed by a clean, pleasing finish and unmistakable character.