The new release is a maple barrel finished straight rye whiskey named Phil’s Shadow in honor of Punxsutawney Phil, the famed groundhog that, for the past 135 years, has been forecasting the early arrival of spring or the lingering of winter. Wigle Whiskey is joined in the fun by Pennsylvania’s Threadbare Cider, who will be producing a rum raisin cider for the occasion. 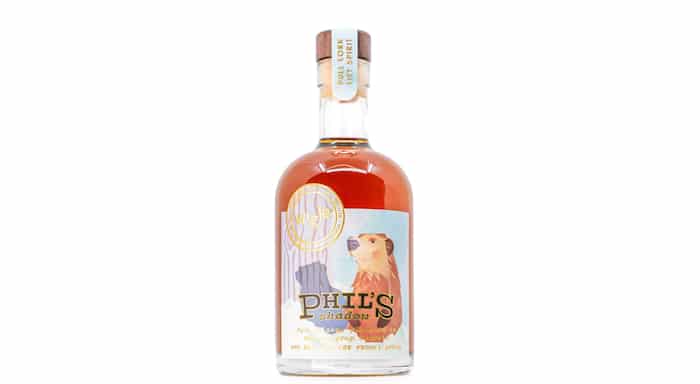 “Three of Pennsylvania’s finest—Punxsutawney Phil, Wigle Whiskey, and Threadbare Cider. Is there a better way to celebrate the 135th year of Groundhog Day virtually?” said Katie Donald, the director of the Groundhog Club, in a prepared statement. “The Punxsutawney Groundhog Club is excited and honored to again partner with a legendary piece of Pennsylvania’s history. We look forward to perpetuating the legend of Punxsutawney Phil to whiskey and cider enthusiasts from all over the world!”

According to Wigle, Phil’s Shadow features their Pennsylvania Straight Rye Whiskey, first aged at least two years in new, charred oak barrels and then finished in maple barrels from Paul Family Farms, a producer of pure maple syrup and raw honey located in Potter County, PA. The combination, according to the distillery, delivers “a velvety sweetness to the rich, dark cherry rye.”

Phil’s Shadow Maple Barrel Finished Whiskey retails for $38 and is available for shipping in PA and DC or pick up at either the Wigle Whiskey Distillery or Wigle’s Bottle Shop. The bottle label, it is said, was “designed by Pittsburgh artist David Pini, [and] approved by Groundhog Phil and his Inner Circle.” A paired cocktail idea is suggested below.

Make a Phil’s Sweet & Sour Cocktail
2 oz Phil’s Shadow
1 oz egg white
.75 oz maple simple syrup
.75 oz lemon juice
Top with mole bitters
Combine all ingredients into a shaker, and shake for 10 to 15 seconds (no ice). Add ice and shake for another 10 to 15 seconds. Finally, strain your cocktail into a coupe or rocks glass, and enjoy!
35
Shares
1.2k
Views
Share on FacebookShare on TwitterGet Our Newsletter
Shop Blackened American Whiskey co-created by METALLICA at ReserveBar! Celebrate the Rock and Roll Hall of Fame artists with the spirits brand co-created by 2009 Rock and Roll Hall of Fame inductee: Metallica. Shop Now!