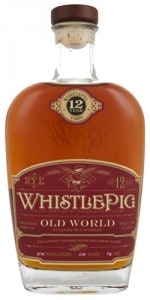 The world of Vermont-based WhistlePig has been a busy one of late as the whiskey operation has released one limited expression after another in its wine-cask finished Old World Series. First was a Sauternes cask offering, followed shortly thereafter by Madeira and Port cask finished bottlings. Now comes the “more regular” whiskey from this line up – Old World.

WhistlePig Old World will be a permanent release in the line up, taking what were the three individual expressions of this 12 year old rye whiskey and marrying them together into a 30% Sauternes, 63% Madeira and 7% Port blend. This final blend is said to be the result of “extensive industry feedback.”

“The result is a new form of America’s first and boldest spirit, rye whiskey, with the essences of Madeira, Sauternes, and Port, adding a level of complexity and refinement that is rare in a whiskey,” said Whistlepig distiller Dave Pickerell in a statement.

Though not immediately mentioned in the press release on the new offering I assume Old World, like its individual limited expressions, will also come from the MGP Distillery in Lawrenceburg, Indiana. It was bottled at 86 proof, slightly lower than the other three, and will price for around $118 at retail starting this month. Tasting notes are below and I anticipate we will have a bottle of it to review within the next month, so stay tuned.