WhistlePig and Ben & Jerry’s are two well known brand names in their respective industries. They both also come from Vermont, and in fact you can experience both in a day in that state if you want, given that there is a WhistlePig tasting room right nearby the Ben & Jerry’s factory in the town of Waterbury. The two also now have another way to enjoy them together, courtesy of a new ice cream collaboration.

The new Ben & Jerry’s Topped Whiskey Biz ice cream, according to those behind it, is described as “a brown butter bourbon ice cream with blonde brownies and whiskey caramel swirls topped with white chocolatey ganache and white fudge chunks.” It makes use of WhistlePig’s 6 year old PiggyBack Rye in the formula, cooked into the caramel swirls. 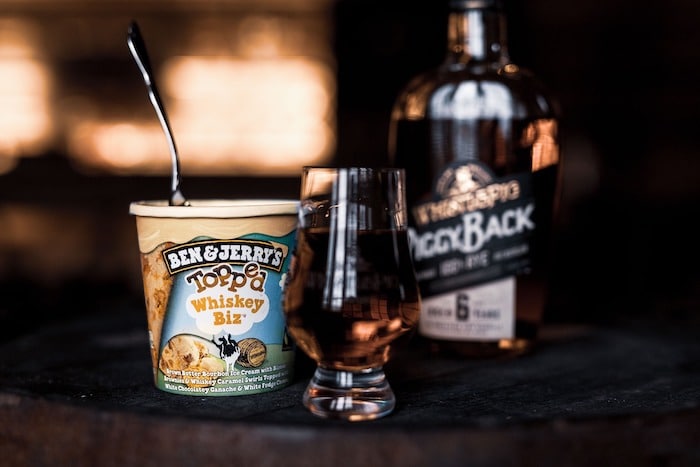 The idea of the Topped ice cream is the covering of the chocolatey ganache, with Ben & Jerry’s letting you have the ultimate exercise in what they say is “personalization and precision. Should you scrape off the layer of semi-soft, chocolatey ganache before going any further? Tunnel down and eat the ice cream first? Or get the best of all worlds by removing the lid and eating the flavor vertically with delicious ganache, chunks and ice cream all in one beautifully balanced bite? Whatever method you choose you can’t lose, so go ahead. This is a judgment free zone.”

“We’re lucky to have incredibly innovative neighbors like Ben & Jerry’s who love to collaborate as much as we do,” noted WhistlePig on social media. “We’re honored to be able to announce our partnership on one of their new ‘Topped’ flavors, #WhiskeyBiz.”

Whiskey Biz is available now at retailers nationwide with a suggested retail price of $4.99-5.49. Other new flavors from Ben & Jerry’s in the Topped range are noted below for your consideration: