Balcones Distilling in Waco, Texas, is known for its very Texas-like penchant for doing things its own way. Founded by iconoclastic distiller Chip Tate, who later left Balcones after a dispute with his investors, Balcones has retained its signature commitment to experimentation and innovation, making it one of the nation’s most well respected craft distilleries. In fact, quite recently, Balcones opened a brand-new distillery more than six times larger than their old digs, with an increase in production capacity to match.

Balcones, like many craft distilleries, has gravitated towards using distinctive local grains to set its whiskies (they prefer the “whisky” spelling) apart from mainstream brands. It’s an approach with a lot of instinctive appeal for small, regional producers, especially those lucky enough to be based in a part of the country with strong agricultural traditions.

To that end, Balcones’ True Blue whiskies are made entirely out of roasted blue corn. That’s unusual on two fronts: First, few corn whiskeys (not that there are all that many on the market to begin with) are made from a mash bill of 100% corn. And second, virtually all of the corn used in American distilling is commodity dent corn, the stuff grown on 1,000-acre farms in the Midwest. Used to make high fructose corn syrup, cheap tortilla chips, plastics, and fuel ethanol, let’s just say that dent corn is not known for its remarkable culinary properties.

Native to the Americas, corn has been grown as a food crop in Central America and parts of the American Southwest for many thousands of years. While Waco is closer to Louisiana than Mexico, Balcones still pays homage to those regional traditions by using blue corn for several of its whiskies, including True Blue 100 Proof, True Blue Cask Strength, Baby Blue, and its Texas Blue Corn Bourbon. 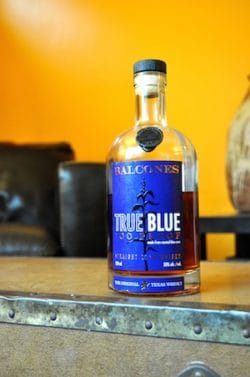 Appearance: Auburn, with a reddish cast

Palate: Sweet, bold smoky—this is one assertive whisky! At first, I get fresh, almost tangy notes of resinous oak, mingled with some oxidized, fruity flavors, like a long-opened bottle of sweet vermouth or flat cola. But then big waves of roasted corn introduce the finish, which sustains a very appealing sweetness all the way through to the death.

I really enjoyed this. It’s bold and true to its raw materials, and the intense corny sweetness of the distillate is a nice match to the relatively bold oak character, especially for a whisky that’s presumably never touched new char. True Blue 100 Proof really delivers on craft’s promise: to showcase distinctive ingredients in a format that’s wholly different than mainstream whiskeys. Bravo. 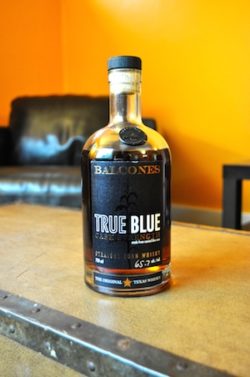 Appearance: A bit darker than the 100, chestnut

Nose: Upon first nosing, I’m confused: the nose is very mild, more ethanol than anything else. After a few minutes resting in the glass, though, the picture gets clearer: lots of sherry, robust oak, vanilla extract, pronounced brown sugar sweetness, and a profound, toasty corniness, just like what I imagine the Corn Nuts factory smells like (minus that Ranch flavor powder stuff).

It’s so high proof it feels almost numbing on the lips, although that’s not an entirely unpleasant feeling. With water, it’s sweeter and smokier, with a more clearly discernible char.

Generally speaking, I don’t love super-high-proof whiskies. Higher proof makes it harder to taste flavors beyond ethanol, and in my world, drinking is supposed to be fun, not an endurance contest. But True Blue Cask Strength does a great job of balancing intensity with flavor, and I was surprised to find myself sipping this happily out of the glass without even a drop of water.

I prefer the 100 proof, but this makes a fine alternative for somebody looking for a whisky with a proof to impress.