As we wrote last year, the Redemption whiskey family is generally considered a decent mid-shelf selection. Its creators, Dave Schmier and Michael Kanbar, started the company in 2010, and since then have sold the company to Deutsch Family Wine & Spirits (you may know them from the [yellow tail] wine brand, among others). Redemption is distilled at MGP, the former Seagram distillery in Lawrenceburg, Indiana—and one of the things I like about Redemption is that they’re pretty darn upfront about that, unlike others I could mention.

As we also reported back in January, the new Redemption Aged Barrel Proof Collection consists of three limited-edition straight rye whiskies. All are distilled “from a mash of 95 percent premium rye and 5 percent malted barley that has been aged between 6-10 years in charred new oak barrels” before being bottled at full proof.

“Every so often, we’ll run into a barrel in the batching process that is so brilliant, we think it deserves a bottling of its own,” said Dave Schmier, founder of Redemption, at the time these were released. “The Aged Barrel Proof expressions are thoughtfully aged in the sweet spot of six to ten years to give the final product character and the ‘right from the wood’ flavors of a big whiskey.”

Recently some bottles of all three of these landed in our office…and eventually on my dining room table, as I prepared to go for a high-proof hat trick. 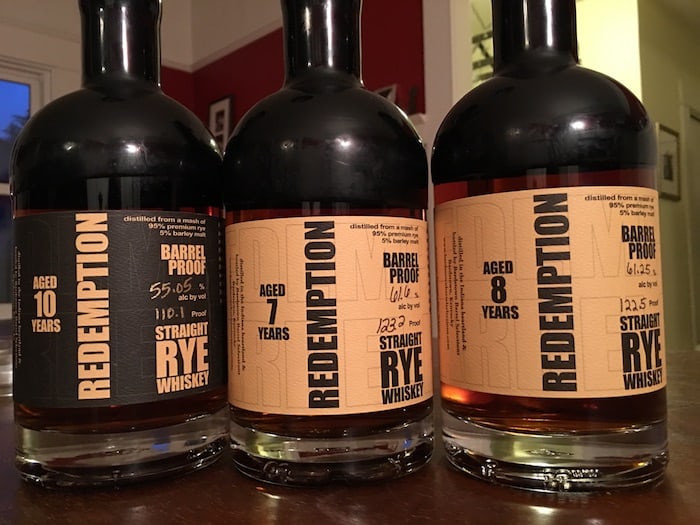 Color: Kind of a red hue; like an aged shellac.

Palate: Hoo boy! That is quite strong. Really, really strong. Hot in the mouth, cinnamon and pepper on the finish. Get this girl an ice cube. I tried drinking it so less of it touched my lips, because I was reaching for the Blistex to cool ‘em down.

Well, it sure packs the proverbial punch. The heat lingers. And yet sure, it’s hot and it burns somewhat, but it’s…dareisay, fun? This rye is like that friend whose parties you aren’t so sure about, but then you show up and have a fantastic time. Then again, it’s not difficult to have a fantastic time when you have this much alcohol. Did I mention this was strong?

Palate: This is much more easy-drinking than the 7-year—if easy-drinking can be applied to a 100+ proof whiskey. While I got a similar peppery burn, far less heat came through, instead replaced by a sweetness that was in no way saccharine.

I enjoyed this; it has a sweet, oaky finish. It has the creamy mouth feel of a cube of good chocolate, with notes of root beer on the finish, too. (This combination is better than it sounds, I swear.) Flavor is present…not just heat. I would have no problem sipping on this all night. Or at least once or twice.

Color: Alder; the color of a shiny acoustic guitar.

Palate: I got some pepper and cloves, like whiskey-soaked holiday cakes. This is very over the top and indulgent. I actually like the 8-year better; there was more sweetness and nuance to it. This is a solid offering, but it’s not to my palate as much as the 8-year. It kind of screams “HOLIDAYS!!”

The finish is a little astringent. Also, it does have some burn—more than the 8-year, but not as much as the too-powerful 7-year. It’s good, but honestly, I’d be happy to save a couple bucks and just go with the happy medium of the 8-year out of these three.