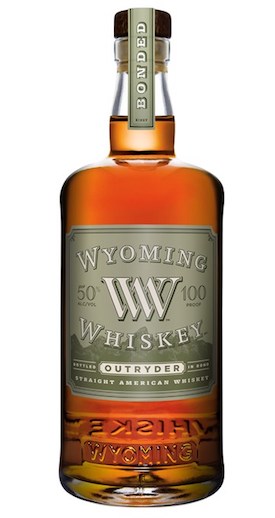 An outrider (in equestrian terms) is one who stands apart from a band of horses for the purposes of herding, keeping the others from wandering astray. By such a comparison, Wyoming Whiskey’s Outryder, a rye-forward multi-grain whiskey, should be special, yet should also act as an anchor which supports their boutique line-up of libations. Its unique blend of Wyoming-grown winter rye, corn, and malted barley fits the bill and allows Outryder to stand apart from the rest of their more approachable, bourbon-heavy lineup.

Wyoming Whiskey has, in Outryder, crafted the first Wyoming-made straight American whiskey using rye. This project is the sum of two parts, different mash bills created and blended to bring forth the fusion of craft bourbons and ryes. The first, representing a high-rye whiskey (although not technically a “rye whiskey,” as it contains less than 51% rye), utilizes 48% rye, 40% corn, and 12% malted barley. The second, inspired by classic bourbon, utilizes 68% corn, 20% rye, and 12% malted barley.

All grains are lovingly grown at Rageth Farms in Byron, Wyoming. This whiskey was ‘laid to rest‘ in November of 2011, and has recently become available for the first time as of the fall of 2016.

Sometimes deviation from the norm can lead to a mess, or downright disaster, although it appears that the fine folks at Wyoming Whiskey have unlocked their own secret of handling rye in a delicate and complimentary manner.

Appearance: Colors are warm and full of golden and amber hues. Clarity is impressive and the liquid seems to possess a high viscosity with wave-like legs.

Nose: The nose on this rye-heavy pour is surprisingly soft, with pronounced yet not overbearing notes of fresh laundry, sawdust, vanilla, spring flowers, and a spicy hint of freshly baked ginger snaps. The aroma is both complex and enticing in its lack of extreme heat or astringency.

Palate: This whiskey hits the palate hot, not uncommon for 100 proof water-free, but soon makes room for some interesting flavors. A rich graininess emerges first, dotted pleasantly with notes of cinnamon and nutmeg, bringing forth the sensation of biting in to a mild spice cake. The heat mingles with a fun floral note from the rye, creating an exceptional perfume that layers throughout the malty, rich body and adds complexity. As my palate acclimates to this drink, a rich aroma of leather arises and further sips see hints of cocoa and peanut skins with a dry, burnt molasses backbone.

Adequate aging, thoughtful preparation, and an inventive grain bill all contribute here to a quite successful dram, one which continues to blossom from the bottle to the glass, and provides thoughtful intricacies for the whiskey aficionado to ponder over the course of an ounce or two.

The true success here is how it maintains some of the more dessert-ish rye and bourbon flavors, as well as the viscocity, of traditional Kentucky-bred beverages while axing the oft-cloying sweetness. If Wyoming Whiskey continues to put as much love into further projects, they will certainly be a distillery to watch.