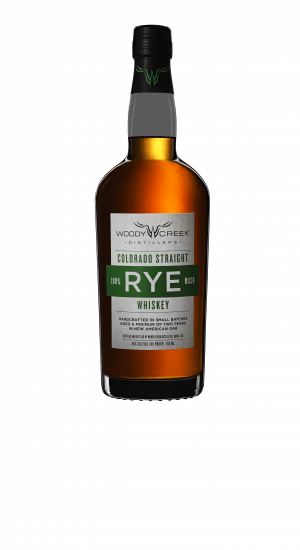 What do you get when you combine a small business owner, a Department of Defense subcontractor, a missile and space network engineer – mix in a healthy dose of investment money and a love for craft drinks – and let it sit for a bit in the crisp Colorado mountain air? You get Woody Creek Distillers. Entering the scene in 2013, Woody Creek is best known for their vodka. They pride themselves in taking complete control of the entire process, start to finish (for example, they’ve engineered their potatoes, which they grow themselves, later sending their brewing waste back to the farm to turn into compost).

Their hard work paid off when their vodka won Best in Class at the 2015 San Francisco World Spirits Competition. Of course, when you make that kind of entry to the fray, you’ve got a lot of pressure for your next entree. Taking what they learned from their vodka process, Woody Creek hit the ground running with their Colorado Straight Rye Whiskey, which earned double gold at the 2016 World Spirits Competition.

Made with their own rye, and distilled and aged for “a minimum of two years” onsite in American oak casks, Woody Creek Distillers’ Colorado Straight Rye Whiskey comes with quite the pedigree for a newcomer. Let’s take a taste and see how it lives up to the hype.

Vital Stats: Woody Creek Distillers Colorado Straight Rye Whiskey is a 90 proof, 100% rye mash, aged and distilled on-site in new American Oak. It comes in a 750 ml cork-topped bottle, and retails for about $50.

Appearance: The Woody Creek Distillers Colorado Straight Rye Whiskey is a quite light in color – a few shades off from a glass of white wine. A lovely saffron-yellow, the legs are thin and fast.

Nose: The nose is subtle but invigorating; lemon peel, pine, and clover; like the last bit of a summer afternoon, bottled and sold.

Palate: The first sip goes down sweet and oh-so smooth. It’s a fruity drink, with hints of raisin and Honeycrisp apple. It lacks the lingering sharpness of many whiskeys, leaving a juicy, cider-like aftertaste on the back of the tongue. If the nose holds a whiff of summer, then on the palate it’s doubly so.

Final Thoughts: Woody Creek Distillers’ Colorado Straight Rye Whiskey continues to earn the stellar reputation that the distillery established with its vodka. A wonderful combination of sweet and flavorful, the whiskey is a joy to drink. It’s something I would share with my whiskey-hesitant friends as an argument against the whiskey-drinker-as-masochist trope – and yet, there’s enough of a flavor profile here to keep any rye veteran coming back for more.