Maybe it’s because I’ve been watching too much of HBO’s Westworld, but everything about this whiskey makes me feel like a cowboy. Woodinville Whiskey Co.’s One Hundred Percent Rye is definitely not made in the south, however. Hailing from Woodinville, Washington, this distillery prides itself on utilizing locally sourced ingredients, clean waters, and the unique aging environments offered by the Pacific Northwest. Regardless, this whiskey is a cowboy-kick in the mouth – in the best way.

Woodinville Whiskey Co. was established in 2010, and has become Washington’s largest distillery by a long shot. Using their unique “microbarreling” technique (a term coined by the distillery), each batch of this rye is handmade and aged in a small, charred, eight-gallon, American Oak barrel. The special barrel ensures the whiskey comes in contact with three times more wood than if it were aged in a standard barrel according to Woodinville Whiskey Co. The result is a resounding mature oak flavor that is distinct to Woodinville’s One Hundred Percent Rye.

It’s the complex wood flavor that evokes visions of enjoying this spirit in an old-timey saloon, which is fitting for a style that previously reached the peak of its popularity around the 1800s, a time when the West was opening up to settlers for the first time via the Louisiana Purchase. Unfortunately, rye whiskey’s popularity had waned by the end of prohibition in the 1930s. But the style has seen a resurgence in popularity recently, with many craft breweries trying their hand at crafting rye whiskies. 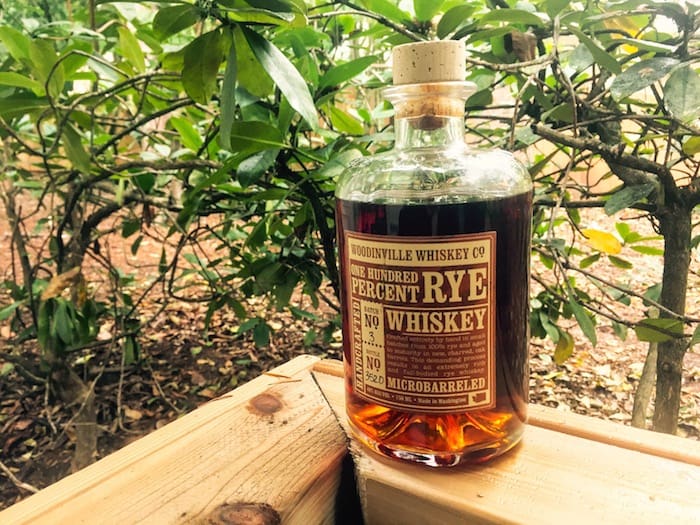 Appearance: Red and amber reminiscent of the red dirt in the American Southwest, with medium, slow legs.

Nose: Caramel hits the nose initially, followed by cinnamon and cloves. The big player here is really the oak. It smells crisp like freshly cut wood.

Palate: Comes in slow and mellow with notes of caramel and cinnamon, but quickly intensifies into a hot oak and slightly grassy flavor. It smooths back into cinnamon and clove overtones on the back end. Oak is the star of the show, and it’s nicely accentuated by a subtle sweetness.

If you’re a fan of complex oak flavors and robust rye whiskey, this is a great choice. I think their unique barrelling technique sets it apart from other rye whiskies. I drank it straight and really enjoyed it, but I also made a hot toddy with some lemon ginger tea.