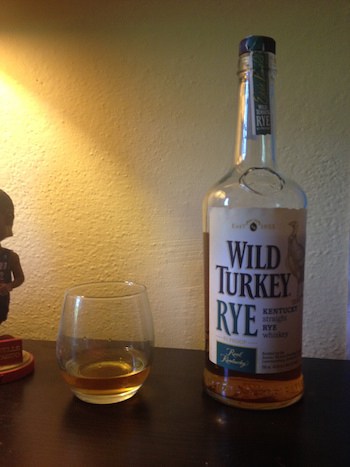 image copyright The Whiskey Was

Probably more embedded in the popular imagination than any whiskey not called Jack Daniel’s, Wild Turkey bourbon long had a reputation as a favorite drink of brawlers, gamblers and tortured artist types like Hunter S. Thompson and David Foster Wallace. More recently, as whiskey’s popularity in the States has grown, Wild Turkey—now owned by Italian spirits giant Gruppo Campari—has been pursuing a more refined image.

Best known for Wild Turkey 101, their signature middle-shelf bourbon, Wild Turkey now makes a range of whiskies, from top-shelf expressions to flavored spirits. Wild Turkey Rye 81, the focus of this review, is among their current lineup. The distillery also makes a 101-proof rye, which was phased out for a year or two in favor of the 81-proof version, but seems to be available once again.

This whiskey is made with the minimum percentage of rye to qualify as a rye whiskey: the mash bill is 51% rye, 37% corn and 12% barley. No age statement is given.

Nose: sweet notes predominate on the nose, with relatively little of the spiciness often associated with rye. Vanilla and honey are immediately noticeable, followed by spiced apple cider and toast.

Palate: quite oaky, with a fair amount of honey sweetness and some charcoal. The hint of spice found on the nose is barely noticeable on the palate.

Finish: the finish is somewhat astringent, not overly long, and dominated by woody notes like charcoal and oak.

Overall, this is a rather woody, fairly sweet whiskey, which I probably wouldn’t have identified as a rye in a blind test (probably not surprising, given the low-rye mash bill). While not unpleasant by any means, it lacks the punch and complexity I like in a rye whiskey; there’s simply nothing particularly interesting about it. It’s decent for mixing, but I’d just as soon pick up a bottle of Wild Turkey 101, which also retails for around 20 bucks, for that purpose.

I give Wild Turkey Rye 81 a score of 77. You can hunt down a bottle of it online for sale here.