From Finger Lakes Distilling in upstate New York comes White Pike Whiskey, one of the most prominent white whiskey brands available. A white whiskey is basically whiskey that usually is unaged, created by removing the whiskey immediately from the still and something that’s not typically put into barrel – hence it has no real color and is clear. The distilled mash used to make the whiskey for this review includes 59% corn, 28% spelt, or a species of wheat, and 13% malted wheat, resulting in a relatively low alcohol by volume of 40%, or 80 proof. 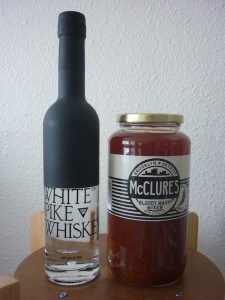 True to its name, White Pike has a crystal-clear appearance, and drinkers could be forgiven for thinking that it might be vodka or gin. The first thing one notices about the scent is that it tends to be light, yet very directly impacts the nose. The smell predominantly reminds one of the scent of rice, which is surprising but pleasant. It is also possible to detect deep sour hints emanating from the whiskey, which indicates what the taste will be like.

The finish is very clean and smooth, but it tends to be bland. Some drinkers may appreciate the crispness and light taste, but White Pike is not a terribly memorable whiskey compared to most other brands. The taste mostly is similar to that of vodka, with a strong lingering taste of corn that ultimately isn’t terribly memorable and isn’t a taste that one wants to last.

The taste on the palate fades quickly. It is possibly a consequence of White Pike not being aged for a long time (18 minutes to be exact); without sufficient time given to let the whiskey age, it ends up being tasteless compared to other whiskies, which will disappoint many whiskey aficionados.

White Pike really comes into its own when it is mixed with tomato juice and other ingredients to produce a Bloody Mary. In this form, the flavor of the whiskey becomes more prominent and blends nicely with the tomato juice. Specifically, I used McClure’s tomato mixer for this cocktail, and the results were excellent. Adding five ounces of tomato juice to one ounce of whiskey, the cocktail contained a refreshing blend of sour and sweet flavors, with an underlying current of the whiskey integrating smoothly.

One can choose to sip this whiskey, drink it immediately as a shot, or mix it in a wide variety of cocktails. White Pike whiskey is a good choice for anyone interested in checking out white whiskies and sampling a popular trend in the whiskey community. The price of around $31 is reasonable for a 750 ml bottle.

70
Shares
564
Views
Share on FacebookShare on TwitterGet Our Newsletter
Cheers to the Dads! Personalize a bottle of his favorite whiskey to create a modern gift for the modern man. Use code: FATHERSDAY20 for $20 off your next order of $100 or more at ReserveBar