The distillers at WhistlePig took a passion for rye whiskey, an old dairy farm, lot of moxie and turned a leap of faith into what’s become a fan favorite in the American rye whiskey scene. The distillery is nestled comfortably on a 500 acre farm in Shoreham, Vermont, which will eventually grow all of the rye used in their Farmstock Rye series. It also is home to pigs, sheep, goats, horses, and even bees and maple trees. WhistlePig is committed to using their farmland to ultimately cultivate a truly farm-to-bottle rye whiskey.

WhistlePig tout’s Farmstock Rye Crop No. 002 as the next step in their “100% Triple Terroir vision,” which utilizes completely local products to make the whiskey: all their own grain, proofed with local spring water, and aged in their own custom Vermont Oak barrels. This release actually uses 32% in house whiskey in the blend, whereas their first release in March, 2017 was only 20%. The estate whiskey is aged for just two years, blending a young, unpredictable whiskey with more seasoned rye from Canada and Indiana.

Farmstock Rye Crop No. 002 was crowdsourced and taste-tested by over 500 industry professionals, bartenders and influencers to create a blend that’s said to be crowd-pleasing and well balanced. Their Farmstock Rye is not as spicy and bold as their Boss Hog rye, instead distillers opted for a sweeter, more subtly complex rye profile to complement their line of rye whiskies. 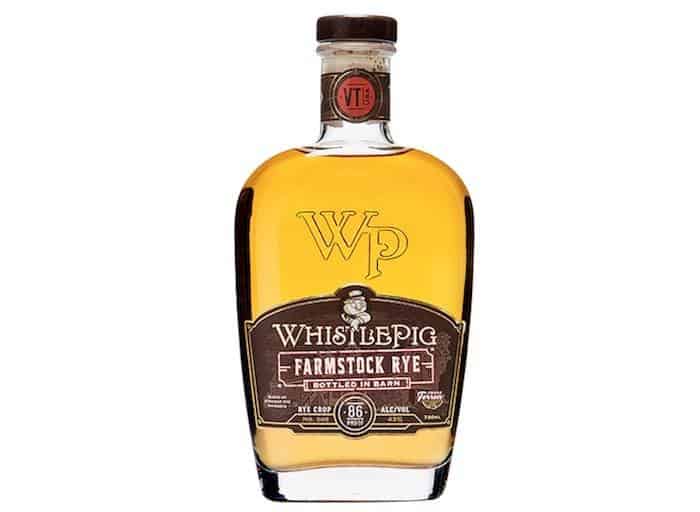 Appearance: The liquid is light golden amber in color, and sticky legs that bunch up at the top, making patterns like burnt plastic. The viscosity is similar to a simple syrup.

Nose: Typical whiskey notes of caramel and vanilla are complemented by freshly baked bread, charred marshmallows and oak, followed by hints of citrus, pepper, and smoke. The smell struck me as pretty strong at first, and ultimately mellowed out after it opened up for a few minutes. The aroma is definitely on the sweeter side.

Palate: Balance is a key component of this whiskey; there’s a lot going on but it’s so well balanced that nothing is overwhelmed by anything else and every flavor has its own spotlight moment. Our flavor journey kicks off with sweet caramel, fresh cut grass and citrus. In the middle, pepper, orange peels, rye spice and cinnamon gum leave the signature rye spice tingles on my palate. The finish lingers, with rye spice building its way through each sip.

I love having whiskey with a cigar or my meal. The distiller recommends pairing this whiskey with pork belly and arugula with a maple vinaigrette, or brussel sprouts and garlic with a sweet glaze. It also paired well with my excessively large but light Big & Beefy cigar. This is the type of whiskey I could enjoy neat, on the rocks or in a cocktail. WhistlePig has done a nice job pairing their young whiskey with more matured rye flavors, creating an interesting and complex rye.