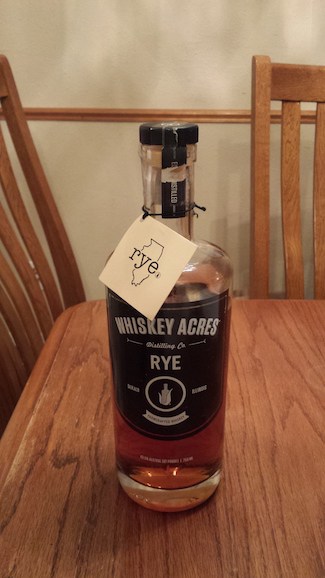 We’ve written about Whiskey Acres before; located in Dekalb, Illinois, 65 miles west of Chicago, and run by fifth-generation farmers, Whiskey Acres calls themselves a “seed to spirit” distillery. That means that every aspect of the process – from laying the fertilizer, to seeding the grains, to harvest, to distillation – occurs on site.

There’s an appeal to knowing exactly how your drink is made – see the rising popularity of the “farm-to-table” movement as an analogous example in the restaurant business. The idea of farm-to-glass whiskey must have jived with someone in the USDA, as Whiskey Acres was recently rewarded with a $250,000 grant to “assist agricultural producers enter into value-added activities.”

Run by father-son farmers Jim and Jamie Walter, and their partner Nick Nagle, Whiskey Acres uses less than 10% of the grain they grow on site to actually make their liquor. But, though they’ve only opened their distillery doors in 2014, Whiskey Acres has been plenty busy producing variety of spirits. Currently up for offer are their corn vodka, corn whiskey, bourbon, and, most recently, a rye whiskey.

Now, the U.S. Government takes a firm stance when it comes to defining what, legally, defines a certain whiskey. With a firm foot down, Uncle Sam classifies rye as being made with a mash of at least 51% percent rye. But, of course, the sky’s the limit! With their newest offering, Whiskey Acres took that challenge to heart: their rye has a hefty bill mash of 75% rye.

Appearance: In the glass the Whiskey Acres Rye is a nice almond-amber, with thin, slow legs.

Nose: The nose is soft and sweet, with hints of caramel apple and buttered popcorn.

Palate: It’s surprisingly smooth considering the high-rye mash! The first dram opens with a clover-honey glow on the back of the tongue, that fades into the flavor of dried fruit – prunes or dates – and then settles into a not-unpleasant mid-tongue tingle with only the slightest bitter aftertaste.

You know, I balked at the high-rye mash bill – I’m usually not a fan of too rye-heavy distillations – but this whiskey has turned my previously-held assumptions on their head. And I’m amazed at how full the flavor is, without any particular element coming across as heavy-handed, considering the young age of this batch.

With a fantastic palate and nose, and an affordable price, I highly recommend checking this one out. If this is the future of farm-to-still whiskey, count me in.