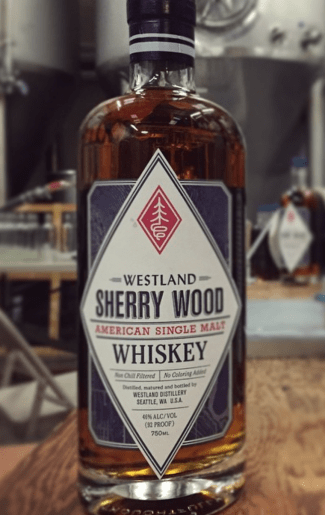 Westland Distillery out of Seattle, Washington has been distilling a small handful of American single malt whiskies since 2010. We visited them to tell their story this past spring, noting they are another of the growing number of American craft whisky producers pushing to make American whiskies of single malt status akin to their Scottish industry forbearers.

The distillery makes a flagship single malt, a lightly peated expression, and a sherry wood expression. The Westland Sherry Wood American Single Malt is the dram visited here. In true Scottish tradition, the mash bill is purely 100% barley, relatively uncommon for American style whiskies. Those hoping to find a friendly alternative to their usual bourbon may shy away from Westland’s expressions. Those hoping to find whiskies with a nod and wink to Scotland may be pleased with these local expressions.

The Westland Sherry Wood American Single Malt presents in the glass a light golden, just barely orange from yellow. Very obviously barley-forward from the first sniff, the dram displays no vaporosity or bite. Very honeyed on the nose, reminiscent of an apiary smackdab in the middle of a barley field. Overlaying these is a light layer of candied sweetness not unlike the traditional kitsch Easter ham toppings of pineapple and maraschino cherry.

The ham topping element of the nose couldn’t help but make me miss some of the smokiness of peated expressions and the lack of leathery, chewiness of some tougher American bourbons. After opening entirely, the candy and sweetness on the nose give way to a darker, woodier note—finally making the sherry cask element obvious. Further, the quality and age of the sherry casks shines through almost unbelievably clearly.

The first impression on the palate, as on the nose, is a barley-packed punch. After the initial barley impression wears off, black licorice and fresh anise appear, backed very lightly by spice. The integrity of the sherry cask comes into play mid-taste, making room for candied fruit notes once again. Plums in heavy syrup and stewed red currant round out the palate.

The finish at first is subtle and sweet, slightly candied, but not so heavily as on the nose. Herbal enough to be refreshing, but as the finish stretches out becoming more akin to a gob of sugar syrup on the tongue.

Very typically a barley-forward expression at first blush, the dram transforms with the addition of the sherry cask aging period, transforming it from basic to nuanced. Although in many ways, barley-forward mash bills make for whiskies that taste naked, Westland rose above that feeling for me. Westland Sherry Wood does not achieve American single malt perfection in my eyes, but may to many others. An incredibly solid dram, with the taste of clear intention in production.

I give the Westland Sherry Wood American Single Malt a score of 93. You can find a bottle of it for sale online through a few different retailers.

203
Shares
1.4k
Views
Share on FacebookShare on TwitterGet Our Newsletter
Cheers to the Dads! Personalize a bottle of his favorite whiskey to create a modern gift for the modern man. Use code: FATHERSDAY20 for $20 off your next order of $100 or more at ReserveBar